In fact, some of the more popular features in Apple’s iOS 6 can already be found within Google’s mobile platform.

Here is a look at features that Apple has included in its new iOS platform and which Google Android users already have had access to in one form or another.

With iOS 6, Apple has introduced a new home-baked Maps application that is set to replace the Google Maps app that has come standard on the iPhone and iPad for years.

Apple’s map solution offers turn-by-turn directions, 3D maps, traffic updates, and route recommendations. Thing is, some of these have been built into Google Maps on Android for quite some time now.

In fact, the only new piece of the puzzle are 3D maps which Google announced would be coming to Google Maps at some point in the near future.

Additionally, while this is available for most Android devices, this feature will likely be coming to the iPhone 4S, iPad 3 and the next iPhone only. 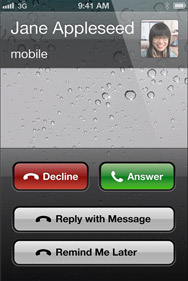 Apple has included a new Phone app that allows users to quickly reply or set a reminder when they can’t take an incoming call. This is especially useful for when a call comes in and the user might be busy. A simple swipe brings up a menu that will allow users to help manage phone calls.

This feature is not new to the mobile world. In fact, it has been baked into Android for quite some time now. Android prompts users to do something similar should the user be busy.

Like iOS 6, Android allows users to create reminders or shoot off a quick text if a call is received when busy. It even allows users to pre-write a message for an easy one press response.

FaceTime Over 3G and 4G

Finally, Apple has made FaceTime, its video chat service, available using 3G and 4G. Currently, FaceTime users can only use the service when connected to a Wi-Fi network.

This is something that has been included in Android for quite some time. Google Talk allows users to video chat over cellular networks as does Google+ Hangouts.

So, while this is will be extremely useful to iOS 6 owners, it’s already on Android and has been for quite some time.

Apple has added something it’s calling “VIP” inside its Mail application. This feature will allow iOS users to select the friends, family and co-workers that are most important to them which will then filter into a separate folder. Emails will also show up as notifications on the lock screen.

Again, this is a fantastic feature but Android has had something similar for quite awhile now in the form of its Priority Inbox.

Priority Inbox does pretty much the same thing as VIP. One thing that is different is that it will automatically determine who your important contacts are. It appears that iOS users will have to input VIP’s manually.

One of the new features that Apple is touting in Safari is the ability to look at webpages in full screen mode when turning the iOS 6-powered device into landscape mode.

Indeed, Android already has this feature.

Another Safari feature that Apple talked up today is the ability to sync browser tabs between devices. So, tabs opened up on Safari on the laptop or Mac will appear on the iPhone or iPad.

iOS users have been waiting and clamoring for deeper Facebook integration within the operating system ever since Apple baked Twitter into iOS 5. Well, with iOS 6, Apple has delivered.

The ability to share Photo Streams with friends and family has been a sought after by iDevice owners and Apple has come through in iOS 6.

With iOS 6, users will be able to select individual photos to share with friends who are on iOS 6, OS X Mountain Lion or iCloud. The sharing is instant. Sharing works over cellular and Wi-Fi and it doesn’t count against iCloud storage space.

Google’s Android features something similar in its own social platform, Google+. With Google+, users can elect to share photos with friends inside of their circles, much in the same way as the new Photo Stream.