Today is officially Apple and the iPad day, with CEO Tim Cook taking the stage to announce everything the company has been working on. From OS X for the Mac, iOS 7 for mobile, and of course new iPad tablets. Right out of the gate Tim Cook started talking about the iPhone, how successful the iPhone 5s launch was, then took the moment to take a few shots at Android and the competition.

While on stage Tim Cook talked up the new and biggest change to iOS since its birth, that being iOS 7. Talking about the beautiful new design, Tim immediately turned to updates. Something we know isn’t the strong point of Android. Sharing statistics that iOS 7 was the fastest software update in history. Then claiming as of today roughly 64% of iOS devices are already running iOS 7.

According to Tim iOS 7 is the “biggest and fastest software upgrade in History” with 64% running iOS 7. Which is a pretty impressive feat no matter how you look at it. Getting nearly 65% of devices all updated as fast as Apple has, is unprecedented. Which is why we then received a quick shot at the competition, which mainly is Google’s Android.

As we all know, Google’s preparing to launch Android 4.4 KitKat sometime this month, which surely won’t have nearly the same type of adoption rate. With billions of devices of all shapes and sizes activated in the world, the level of control and upgrades is on a completely different level. When talking about iOS 7 already reaching nearly 65% of devices, Tim Cook called out the competition stating “It blows away the other guys,” which it does, but does this matter? 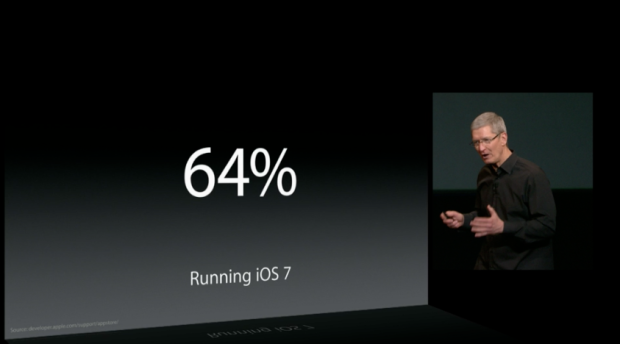 Google’s latest software update numbers show that almost 50% of all Google-certified Android devices are currently running the latest Android 4.1 and above Jelly Bean. Which is by far the best numbers for any of Google’s latest OS updates, but it’s been out for over a year. In comparison to iOS 7 the adoption rate is extremely slow, but that’s in part due to carriers and manufacturer skins.

So we ask again, does this matter? Updates matter, yes, but when we have Samsung offerings tons of improvements and additional features with TouchWiz for the Note 3 and other Galaxy devices, Motorola adding touchless controls and hands-free voice commands, and much more, this all becomes a little different.

There’s no denying Apple does a great job when it comes to quick software updates, but Google and its partners have continued to improve in this area, even if they don’t necessarily have to, and it’s all just an argument and talking points these days. We’ll have to see how fast Android 4.4 KitKat gets adopted by carriers and manufacturers, which is expected to be the fastest in Android’s history as well.

These things aside up next is the all-new iPad and iPad mini 2, which of course, will run iOS 7.