Distracted driving is an issue facing every person and every local government nationwide. Presently, there are solutions for Android phones and from automobile manufacturers that attempt to curb distracted driving. Apple does provide Siri as a way to curb distracted phone use, but Apple markets it as a personal assistant rather than a driving aid. As a result, some of their distracted driving features are lacking. With iOS 7, Apple could move from an industry straggler to an industry leader in providing enhanced usability while simultaneously lowering distraction.

READ: Voice Commands Just as Dangerous as Texting While Driving

Some vehicles have Siri Eyes Free technology, which allows drivers to activate the Siri button on their phone by pressing a button on the steering wheel. For those who do not have Eyes Free support, pressing the voice command button on the phone will activate Siri in a car where the iPhone is paired via Bluetooth. It would be nice, although not likely, to see Apple add functionality to iOS 7 that will activate Siri when someone presses the Send button on their Bluetooth headset or steering wheel button. That would allow anyone driving a Bluetooth-enabled vehicle to use Siri without having to reach for their phone. 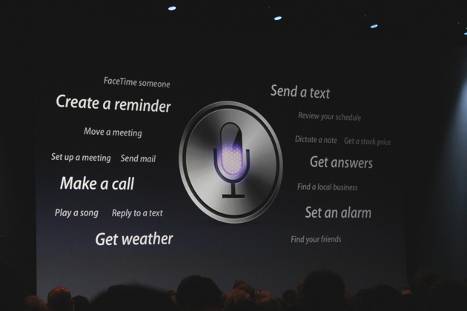 Secondly, voice command in iOS is tedious. Oftentimes when driving, Siri has a difficult time understanding commands. It becomes frustrating for a driver who has to repeatedly say “Change It” when Siri gets a text message wrong. Google Now does significantly better with speech recognition, and also handles more of the processing on the phone than Siri does. Slow processing time, combined with failures when cellular coverage isn’t perfect, creates an environment where a driver will think that typing the text is more efficient than using Siri. That creates a dangerous driving situation.

Ford’s SYNC system (which coincidentally uses the same voice as Siri) has an open API which allows developers to write apps to integrate with the system. Spotify, once connected, can be completely controlled through voice and steering wheel controls in a Ford vehicle. If Apple would open up Siri to third party developers, this functionality could be utilized on the phone. Instead of just being able to launch Spotify from Siri, a driver could request a playlist or star a song.

There are already several Android apps out there that will restrict phone use while driving. Many will even automatically reply to a text message to inform the sender that the driver is preoccupied. The nature of the iOS system would require Apple to develop a similar system in house. They should. Integration could be as simple as “if the phone is moving faster than 10mph enable Do Not Disturb,” which is already built into the phone. It could also be more complex like the OTTER system and follow specific rules and feature parental controls.

Apple’s iOS and Siri are great systems, but with the recent flood of excellent Android solutions Apple needs to play catch up. iOS 7 is a great opportunity to do just that.