A number of bugs related to how Apple implements Microsoft Exchange-related technologies in its latest mobile operating system has forced at least one Fortune 500 company to advise its users not to update existing iPhones to iOS 6. Though the Fortune 500 company was not named, MacRumors did report that this appears to be a major grievance with corporate users.

Here’s what the IT department at that un-named company issued to its users in a memorandum: 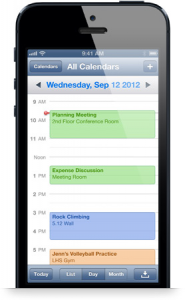 What: On September 27, IT notified you of an intermittent issue caused when calendar appointments are declined from devices running the latest Apple operating system (iOS 6). Apple and Microsoft are providing IT with daily updates on their progress toward a resolution.

Impact: When appointments are declined from an Apple mobile device running iOS 6, a cancellation is sometimes sent to all meeting attendees instead of sending a decline notice to the meeting organizer.

Action to take: Do not upgrade your Apple mobile device to iOS 6. If you have an iPhone 5 or have already upgraded a device to iOS 6, please do not accept or decline calendar appointments from your Apple device until further notice.

There are at least two Exchange-related bugs with iOS 6 that are causing trouble for users. The first bug deals with how iOS 6 handles meeting invitations. Rather than sending a decline to the meeting inviter when a user cannot attend a meeting, the iOS 6 glitch would decline meeting invitations for every invited attendee in that meeting request. Doing so would cancel out the entire meeting for everyone.

A second bug affects push email delivery where a number of users are reporting that their Exchange emails are not being pushed out. Instead, they must manually pull and refresh their emails.

At this time, there is no word from Apple, the maker of iOS 6 and the iPhone hardware, nor from Microsoft, the company that creates the Exchange software, about a bug fix. Users who purchase the iPhone 5 are automatically on iOS 6 as that device was released with iOS 6 pre-installed. Users of iPhone 4S and older devices are advised not to upgrade to the latest iOS 6 as the problems were not present in iOS 5.x.

This news is a setback for Apple, which has been making huge inroads with the corporate market. Apple has leveraged the consumerization of IT successfully to craft engaging products that people are bringing into work and forcing their IT departments to support these new devices. Coupled with Exchange technology, a robust app store, and ease of use, the iPhone has been replacing RIM’s BlackBerry devices at many institutions.

In addition to these Exchange bugs, glitches in the new Maps app in iOS 6 have also create headaches for users and forced Apple CEO Tim Cook to issue an apology for the poor service, promising that Apple is diligently working on improving the Maps experience.