Learn how the iPad Air 2 iOS 8.2 update performs in this in-depth iOS 8.2 review specific to the newest iPad. In early March Apple announced the iOS 8.2 update for iPhone, iPad and iPod touch. Although part of this update focuses on the Apple Watch app and support, there are other new features inside the update that improve the iPad experience.

After spending almost two weeks using the new iOS 8 software on the iPad Air 2 it is possible to go into detail on the iOS 8.2 performance, any problems that this update brings and how it handles on a new device like the iPad Air 2. Although less likely to experience problems and an older device like the iPad 2, it is important to check how the update handles even on newer devices.

The iPad Air 2 shipped with iOS 8 so there is no major dilemma to upgrade from an older version like iOS 7. It is still possible to downgrade from iOS 8.2 to iOS 8.1.3 if you don’t like the update, but for most users this isn’t an issue. There is no iOS 8.2 jailbreak now, but we may see one this month. If you love your iPad jailbreak tweaks, you should wait to upgrade.

Here is a fast look at the most important things you need to know about the iPad Air 2 iOS 8.2 update.

Right after the iOS 8.2 update arrived to download I installed it on the iPad Air 2, iPad 3 and my iPad mini Retina so that I could test the overall performance of this update across various iPad models. One thing that is clear after reviewing many iOS updates is that the performance and problems can vary from one device to the next, even from one iPad Air 2 to another iPad Air 2.

The apps, services and tasks that we all use our iPads for aren’t the same. This can lead to small or large problems that only impact some devices, so keep that in mind as you read this iPad Air 2 iOS 8.2 review.

The iPad Air 2 pulls triple duty for me going from productivity during the day to games and then entertainment in the evening. I watch most movies not on a big HDTV, but on the iPad Air 2 and while I still play most games on a PS4 or Xbox One, the iPad Air 2 plays an important role in gaming in other rooms.

Productivity apps like Safari, IAWriter, Pages, Duet Display and a few others all work fine on iOS 8.2. Games like Trials Frontier, Boom Beach and Trivia Crack ran without any problems. When it comes to watching movies and videos YouTube, Alien Blue, HBO Go and Netflix worked great.

If you run into any problems you should check for updates and if needed uninstall and re-install the app.

The iOS 8.2 battery life is solid on the iPad Air 2. There is no fast draining during use and standby time is as good as every. With a few hours of use each night it is possible to use the iPad Air 2 for a few days without the need to find a charger.

This is a WiFi only iPad Air 2, so I cannot check the LTE connectivity. That said we have not hear major reports of LTE connectivity issues on iPads after the iOS 8.2 update.

WiFi works well connecting to a home network, to a personal hotspot and to various public and out of home WiFi networks without any problems. 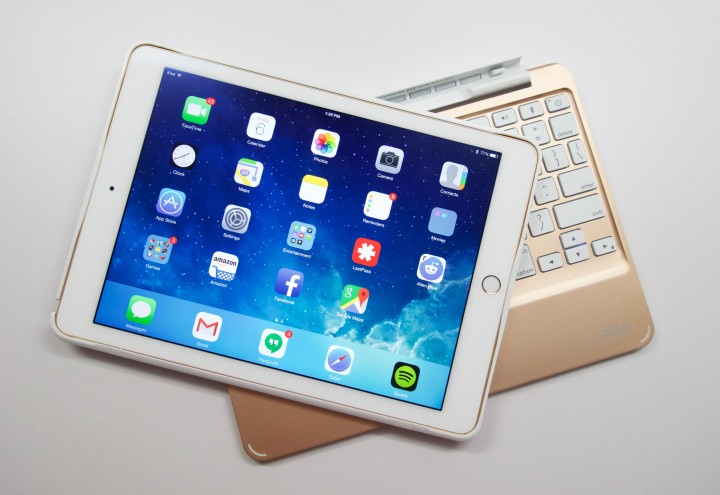 Combined the iPad Air 2 and Zagg Slim Book are a great pair.

While the iPhone 6 is far from bug free on iOS 8.2, the iPad Air 2 is not host to many problems, bugs and issues. Connectivity is great, apps run as expected and so far the iPad Air is rock solid.

Sometimes problems appear after even further use, like an old banana that rots in the back of your car, undiscovered until something doesn’t quite smell right. If that happens you can use our list of iOS 8.2 fixes to cure your iPad problems.

The iPad Air 2 iOS 8.2 performance is fast. The iPad Air 2 was fast when it arrived with iOS 8 on board and it is just as fast today with iOS 8.2 installed. There are no lags or slowdowns in the new software, which is exactly what you would expect from a new iPad.

Is iOS 8.2 Worth Installing

What you need to know about the iOS 8.2 update on the iPad Air 2.

Anyone with an iOS 8 problem should install the iOS 8.2 update on the iPad Air 2. There are a lot of bug fixes, stability enhancements and security fixes in this update. Although you don’t have to install iOS 8.2 on the iPad Air 2, unless you are running specific apps for work or rely on a jailbreak, it is worth upgrading now.

Keep in mind there is an iOS 8.3 beta and you can wait for the iOS 8.3 release in the coming months if you prefer to stick it out on whichever version of iOS 8 you are on.