Despite analysts’ predictions of fluctuating tablet market share, when it comes to web traffic for tablets on the busiest consumer retail day of the year, Apple’s iPad still reigns supreme compared to competing Android slates. In a report by IBM, the iPad controlled 88 percent of all web traffic from tablets for the post-Thanksgiving Black Friday shopping event in the U.S. 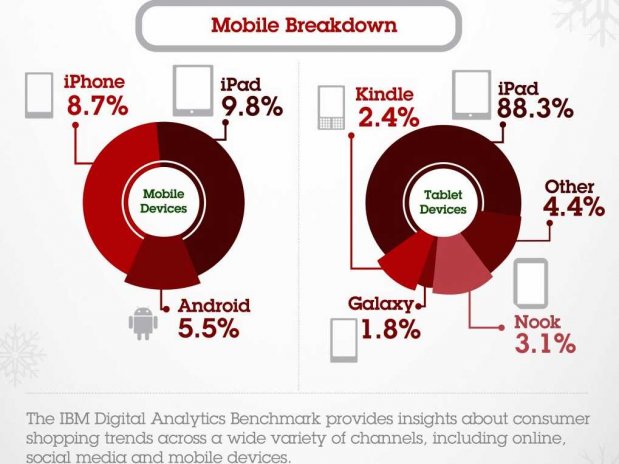 And despite claims by IDC that Apple only commanded as much as 50 percent of the tablet market share as late as last month, Apple’s numbers in online retail shopping shows that in spite of competitors shipping more tablets, those tablets may not be sold to consumers, or aren’t actually being used. Whereas most Android manufacturers tally their numbers based on units shipped, Apple’s numbers show units sold. And given that the iOS-maker has a hard time keeping units in stock and on store shelves, there may not be much fluctuation no matter which way Apple reports its numbers.

But the bigger scenario that should be examined with the iPad dominating tablet web traffic for Black Friday isn’t about the age old–as recent as the last few years–debate of Android v. Apple, it should be about the post-PC era as a whole. With mobile being used for shopping and comparison shopping–the New York Times recently published an article depicting the smart shopper is the one with a smartphone–web experiences should be more catered to different size screens and displays.

While many companies have websites that are geared towards mobile, few companies have a website that is dedicated to touch on a larger display. Such websites could benefit the number of iOS, Windows, and Android tablet owners and would make for a better web experience. And given these are sites that are accessible via mobile editions of Safari, Chrome, and Internet Explorer, among other third-party browsers, site developers would need to build once and target all platforms, rather than building separate apps dedicated to each platform.

Hopefully, with the rise of tablets, especially portable tablets as demonstrated by the success of Apple’s iPad Mini, the Google Nexus 7, and even the Samsung Galaxy Note II, a 5.5-inch phablet, we’ll see more web experiences catered towards tablet displays and not just smartphone versions of websites.