The iPad mini 2 and iPad 5 release date is likely coming ion less than two weeks and with Apple’s fall iPad event on the books for October 22nd, it’s time to start locking in trade in prices if you plan to upgrade and want to sell your old iPad without dealing with eBay.

NextWorth and Gazelle are both seeing a major increase in iPad trade ins during the last several weeks, as consumers plan to upgrade to the iPad 5 and iPad mini 2 which could arrive as soon as November 1st.

NextWorth provides the following chart which tracks the average selling price of the iPad 3 and iPad 2 on eBay during the iPad 4 release last year. It shows that the iPad 4 resale value could drop as much as 10% in the month following the iPad release and 8% between now and the iPad event. 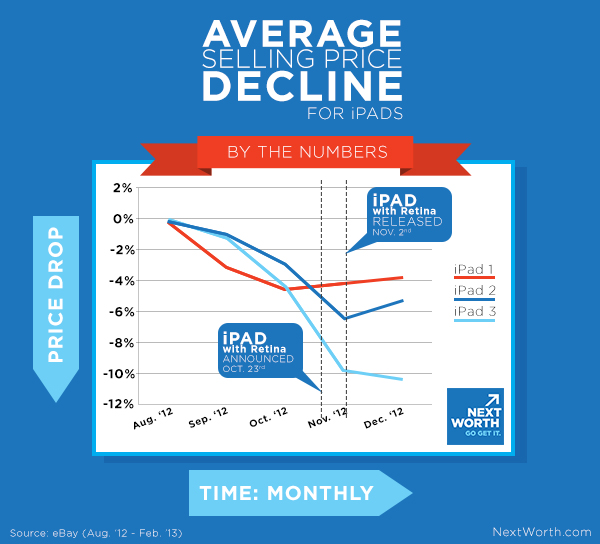 The iPad mini 2 and iPad 5 release is pushing iPad trade ins up, as prices are expected to decline.

This is similar to the trends we see with the iPhone during launch events, and NextWorth is not alone. Gazelle, another gadget buying company that offers a similar process, reports that iPad trade ins are up 321% on October 10th, compared to the previous Thursday and year over year iPad trade ins are up 246% from October 1 to October 10.

The chart below shows what iPads users are trading in to Gazelle in anticipation of the upcoming iPad mini 2 and iPad 5 release date, compared to trade ins last year.

Both Gazelle and NextWorth offer an option to lock in an iPad trade in value for 30 days, which means it’s possible to keep the current iPad until the new models come out in a few weeks, with a little wiggle room in case the LTE models are late or the iPad mini 2 is in short supply.

Here’s a quick look at some of the iPad trade in values for the iPad 2, iPad 3, iPad 4 and iPad mini. When possible this estimate includes the AT&T cellular model.

eBay is another option for selling the an iPad ahead of the iPad 5 release, and one that offers a higher rate of return for users who are willing to list and ship and iPad. For example, a 64GB iPad 4 with AT&T is going for $540 to $550 on eBay, a significant premium over trading in. Search sold listings on eBay to see how much your iPad may be worth, but keep in mind you may need to ship before you get your new iPad.