If you placed your bets on the iPad just being a big iPhone, you definitely lost money. As seen in the shot of its email operation (via Engadget), you can pull down an email list that looks like what’s on your iPhone, but it’s down a column, not spread across the screen. The iTunes layout is definitely more Mac than iPhone; it’s called iTunes, not iPod. 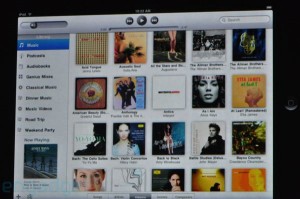 To me, its visual appearance is more like they’re running the iPhone OS within another version of OS X, though since it’s all grown from Darwin, it’s really just another flavor of the OS.