Nielsen’s Mobile Media Report for the last quarter of 2011 reveals that sales of the iPhone not only enriched Apple’s coffers but also brought more new smartphone owners into the fold and increased the company’s mobile marketshare.

Several factors go into this. For the first time the iPhone was available on three of the four major national carriers and, eventually, some local carriers as well. The iPhone 3GS became a free option for AT&T customers and both Sprint and Verizon customers could snag an iPhone 4 at a relatively low price. Plus, the iPhone 4S was so long in coming and generated so much excitement that over 50% of iPhone buyers chose it.

The result is that 44.5% of new smartphone buyers chose an iPhone in December, up from 25.1% in October. 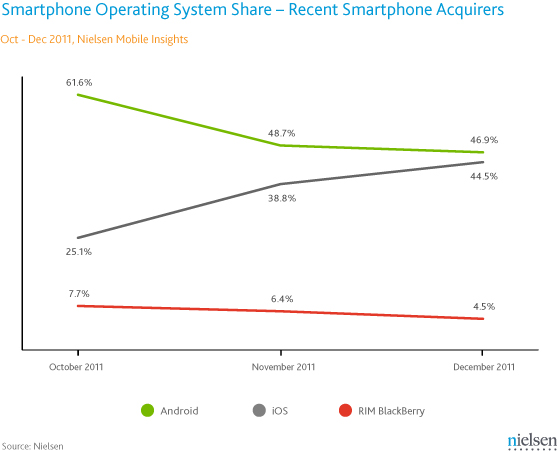 In that time first-timer purchases Android went from 61.6% down to 46.9%. Though Android saw 3.7 million new activations Christmas weekend the data shows iPhones did nearly as well that month. Was there as compelling an Android phone released in those months as the iPhone 4S? Several high-profile handsets came out, including the highly anticipated Galaxy Nexus, the Samsung Galaxy S II family, the Motorola Droid RAZR, and more. Maybe the sheer number of handsets was part of the problem.

Nielsen’s data indicates that Android still dominates mobile marketshare both with existing and new smartphone owners. The iPhone appears to be nibbling at Android’s growth a little but taking many more users from other operating systems like the flagging BlackBerry, Windows Mobile & Phone, and WebOS. The fact that between October and December people actually bought a BlackBerry or WebOS device surprises me, even if the numbers are very low. 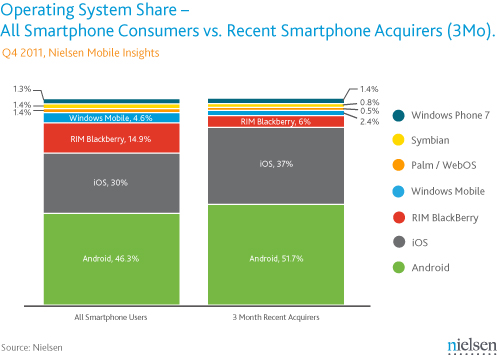 Windows Phone isn’t making a significant showing yet, capturing 1.3% of the overall market and 1.4% among new owners. I wouldn’t be surprised if those numbers grew a little with phones like the Nokia Lumia 900 (which earned a Best of CES 2012 award from us) on the horizon.

I also expect the iPhone’s numbers to plateau in the new year. The holidays are always a good time to get a new phone if you’re eligible, and Apple isn’t going to release a new one every month. We just saw dozens of new Androids at CES and we’re sure to see more at Mobile World Congress next week. When this quarters numbers come out we’ll see how all platforms do in a more “normal” spending environment.