It’s been over a year since the first iPhone 4 (GSM edition in the U.S.) has been released and prices for Apple’s flagship iPhone 4 remain steady at $199 for the 16 GB model and $299 for the 32 GB model, just as they were when the devices were first released last summer. Now, with the iPhone 4S hours away from being announced, we’re hearing some new leaked price points of $49 for the 8 GB iPhone 4, $99 for a 16 GB iPhone 4S, $199 for a 32 GB iPhone 4S, and $299 for a whopping 64 GB iPhone 4S. Most likely, these price points will likely remain the same and unchanged for the approximately 12-month life cycle of the iPhone 4S. This steady pricing model differs drastically than the pricing situation for premium, high-end Android handsets that see price drops almost immediately within months or weeks of being released. So how does Apple maintain premium pricing in a competitive smartphone market? If we assume the ecosystem experience to be similar, there are still major factors that allow Apple to maintain the iPhone’s pricing, and here are some of the reasons: 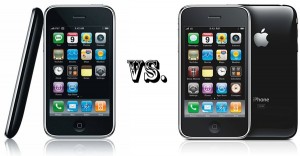 The iPhone 3G and 3GS share the same hardware design and is virtually indistinguishable from afar.

The iPhone is an investment that you can make and know for sure that little will change in a year or two. If Apple indeed releases an iPhone 4S that’s to use the same body design as the iPhone 4 rather than a dramatically different iPhone 5 hardware, then the company will be following the precedent that it has taken since the iPhone 3G where one hardware design dominates a two-year model cycle. The iPhone 3GS is after all an iPhone 3G with beefier specs, and similarly, we can expect that the iPhone 4S will be the second year’s iPhone 4 with a better processor, more storage capacity and slightly upgraded network support that brings 4G HSPA+ speeds, but not quite the robust 4G LTE speeds that everyone is hoping for. That means that for the $200 or $300 you invest at the beginning of a model cycle, you can rest assure and know that your handset will still be chic, trendy, sexy, and far from obsolete. iPhone 4 owners will probably look longingly at the improved camera specs and hardware of the iPhone 4S, but to onlookers on the outside, the iPhone 4 and iPhone 4S won’t be distinguishable.

The approach here is similar to high-end luxury cars where annual refreshes bring better experiences, but unless you’re buying when the car maker is making a major model change, the outside body styling remains very similar between successive years. With high-end automobiles maintaining the same body for about 6-8 years, you can know for sure that your investment at the beginning of the model change will last for about 6 years before your car will look old when a new body style rolls out. Same thing with the iPhone.

One Model to Rule Them All 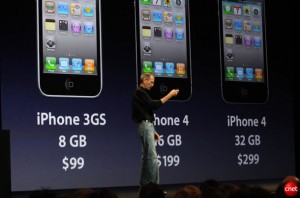 Compared to Android competitors, Apple only releases one major iPhone model on average of every year. Sure, there are different price points for different storage capacities, but by in large when you buy an iPhone, there’s just one iPhone out there. Compare that with, for example, HTC’s product line where there are multiple models at multiple tiers aimed at multiple demographics built for multiple different carriers and you can see a market that’s flooded with too many different choices. Who’s to say that one model is in fact the flagship while another model isn’t? Is the HTC EVO 3D the presumed flagship as it has the most features of all HTC phones given the glasses-free 3D experience, or is it the HTC Thunderbolt as it’s the fastest 4G LTE device from that manufacturer? Then there’s the HTC Sensation, which boasts a premium build quality with a unibody aluminum shell. And if you choose one flagship, then everything else isn’t a flagship and would be competing based on price.

So while diversity of models and builds give consumers choice, flooding the market with too many different variations and models of Android smartphones force Android manufacturers to compete on price rather than experience. Anything below a flagship is essentially akin to a compact car in the automobile world and must compete on price while maintaining a certain number of features to appeal to the mainstream crowd. In contrast, luxury automobiles compete on experience and performance.

Depreciating Price is a Problem Caused by Google

In addition to hardware, there’s software, and with Android’s constant upgrade cycles, users most often clamor about the latest releases but are afraid to put their money where their mouth is. If they buy into Android Froyo, when will that become obsolete and will the Froyo handset they buy today become compatible with Gingerbread when the next-generation OS is released? Will hardware manufacturers give them an upgrade path? Will Gingerbread require vastly faster and better hardware to operate on so that even if they can upgrade, the experience is so bad that they wouldn’t even want to?

Is it fragmentation or obsolescence when a new Android OS version gets introduced?

With iOS, you’ll at least be guaranteed to receive the latest iOS software for a few years after you purchase your handset. And if Apple’s tradition holds true, certain new features of iOS will be reserved for the latest handsets because they require more powerful hardware, but you’ll get the bulk of the iOS experience on your older handset if you’re not ready or qualified to make an upgrade based on your contract with your carrier.

A lot of the quickly depreciating price of Android smartphone is caused in part by Google and in part by the handset maker. Take for instance the HTC Thunderbolt, which was the debut Android 4G LTE handset to land on Verizon’s nascent 4G network. Despite the latest hardware technology, that handset launched with Android 2.2 Froyo at a time when Android 2.3 Gingerbread was gaining momentum. Sure, the Thunderbolt can support Gingerbread through a software update, but then we began hearing Android Ice Cream Sandwich, and even if HTC gave the Thunderbolt a Gingerbread upgrade path, it’s unclear if Ice Cream Sandwich can run on the hardware when that OS edition gets released. And the Thunderbolt, despite being a high-end 4G LTE handset, is full of hardware compromises so users who bought into the Thunderbolt–being that the target demographic is geeky, high-end users–will most likely eye some newer, brighter, better handset in the near future. In an age of qHD, the Thunderbolt was released with a WVGA display, and now we’re hearing of 720p HD screens.

On one hand, these hardware compromises show that there is always room for improvement, the compromises made on devices like the Thunderbolt show that consumers are always eyeing the next piece of technology that fits the mobile puzzle, whether its a better 4G LTE chipset, a crisper display, or the latest OS. These factors add up to reveal a flawed handset–not by design or engineering, but because it’s not future-proof–that will drive down the price of premium Android offerings. When consumers are faced with uncertainty–will my handset be obsolete in x months–they may not buy into the experience until the price fits with what they expect. On the iPhone side, Apple controls the release cycle of iOS and the hardware, and a guaranteed annual refresh rate with a probable major new hardware revision every two years ensure that premium pricing can be applied–no new iPhone model three months down the line to drive prices of the current iPhone model that’s just three-month old down.