At least one developer is already building support for the iPhone 5 into their app.

Tout, a social network stats app, recently updated to version 1.2 to add a new service (Instagram), but more interesting is that it adds support for a taller iPhone.

Despite the typo, it is interesting that Tout was able to get its app approved with such a description. We’ve seen leaks of a taller iPhone 5 for weeks now, but nothing from Apple. We wouldn’t expect Apple to let any app talk about a rumored iPhone in an app description. The company doesn’t even let developers talk about certain iOS 6 features in change logs. 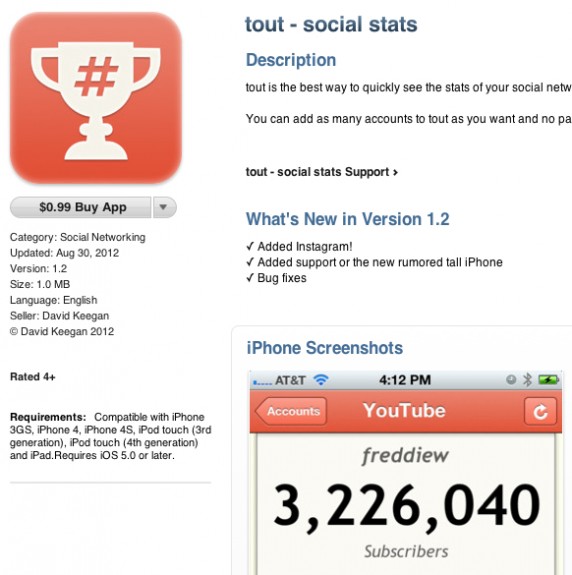 We assume David Keegan, the developer of Tout had to use a workaround to get Xcode to work with a taller iPhone screen. We know such a workaround is possible, and that some Apple apps already support the taller screen.

Keegan likely isn’t the only iOS developer to test his apps with a taller screen, but he is the first that we know of to acknowledge it. It shouldn’t come as a surprise if Apple takes down this version of Tout until Keegan removes the mention of a taller iPhone in the description.