iPhone 5 Battery: Over a Week of Standby Time is Easy

The iPhone 5 battery can survive on standby for a full week on a single charge. Though It’s pretty easy to chew through an iPhone 5’s battery in a single day, it’s also pretty easy to keep it powered on for up to a week if you barely use it. This is especially important in case of an emergency or natural disaster.

I’m the first to admit that I’m not the typical smartphone user.  As part of my work here at GottaBeMobile, I use multiple iPhones, iPads and Android devices. My primary phone is an iPhone 5 that runs on AT&T’s network. My secondary device is an iPhone 5 that runs on Verizon. This put me in a somewhat unique position of being able to test the iPhone 5’s standby battery life, though the test started off by accident.

Read: How to Get Better iPhone 5 Battery Life

I unplugged my Verizon iPhone 5 from a wall charger at about 4:30 AM on February 18, which happened to be President’s Day. I honestly can’t remember why I needed to unplug the phone and use it at that early  hour on a national holiday, but it’s safe to say it had something to do with being woken by my 1-year-old.

Later in the morning I put the iPhone 5 on my desk in my home office and used it sparingly. At some point I covered the iPhone 5 with some paperwork and forgot about it as I switched to my other mobile devices. I didn’t touch it for a few of days, until I used it to place a few calls , read a few news articles and order a couple of items from Amazon.com. Amazingly, the battery had 59% remaining when I started using it on Friday. I didn’t touch it over the weekend and used it for about an hour the following Monday. 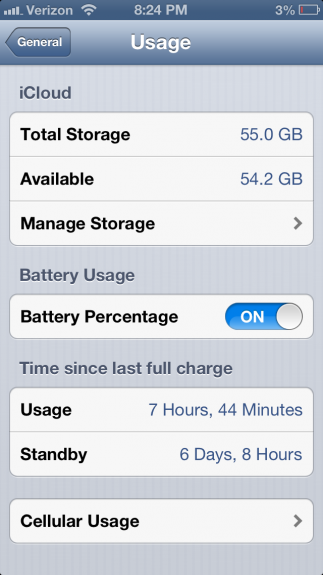 I took a screen capture of the iPhone 5’s Usage screen as Monday, February 25 drew to a close. The iPhone 5 still had 3% of its juice remaining after chugging along for 6 days and 16 hours. It was on standby for 6 days and 8 hours. The screen was on for a total of 7 hours and 44 minutes. By midnight it was down to 1% and it was drained by the time I woke up at 7am.

So how in the world did my iPhone 5 last on standby for a week? I didn’t do anything special other than use it sparingly and let it sit there most of the time. It was connected to my home Wi-Fi network, which means it didn’t have to use its power-hungry 4G LTE  connection. Screen brightness was set to 50% and Bluetooth was on, though no Bluetooth devices were actually connected. The iPhone 5 rang, vibrated and lit up almost every time someone called me since all of my devices are hooked up to my Google Voice number. The screen also turned on every time I received a text message, iMessage or push notification. The Gmail account on this iPhone was set to only check email when I manually opened the Mail app rather than automatically.

Though my iPhone 5’s battery was depleted a week after I took it off its charger, it could have certainly lasted for the full 225 hours that Apple advertises if it weren’t for the almost eight hours of usage time. Apple tests its devices by pairing it with a Wi-Fi network and letting it just sit there doing nothing, with the screen never lighting up.  According to Apple:

“Testing conducted by Apple in August 2012 using preproduction iPhone 5 units and software, on both GSM and CDMA carrier networks. All settings were default except: Wi-Fi was associated with a network; the Wi-Fi feature Ask to Join Networks was turned off.”

The 225 hours of standby team could easily be exceeded by turning off notifications. Turning off the Wi-Fi connection and mobile data would be a huge tradeoff, but it could mean much longer standby time.

While I don’t expect many people to intentionally test the limits of the iPhone 5’s standby time, it’s worth noting that it comes close to Apple’s claims when needed. There are plenty of instances when people need to stretch their iPhone’s batteries to the max. Making the iPhone 5 last for more than a week in standby is easy as long as users don’t need to actually use their iPhones very often and its settings match Apple’s default settings. This isn’t likely out in the real world, but it’s good to know in case your hometown is struck by a flood, hurricane or other disaster that causes an extended power outage.