The invite, which Andy Ihnatko posted to Twitter beckons members of the press to the Apple’s presumed iPhone announcement for a keynote that starts at 10 AM pacific, 1 PM Eastern on September 12th.

The invitation is sparse, but the 12 casts a shadow in the shape of a “5” which is significant. The new iPhone will be Apple’s sixth iPhone, but many of us in the press are calling it the iPhone 5. 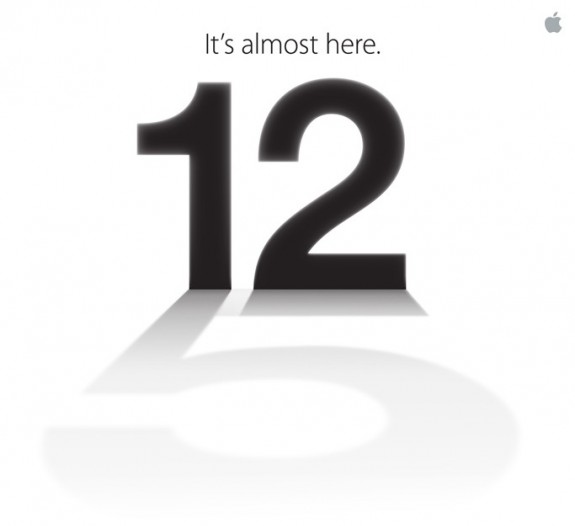 Many assume Apple will switch to the simple “New iPhone” name when it announces the next generation iPhone, but this announcement leads us to believe the company may stick with the number scheme for another year. Or Apple could be messing with us all for a good laugh.

Either way, prepare to learn all the details about the new iPhone on September 12th. We expect a thinner, taller iPhone with a 4-inch display that abandons the 4:3 aspect ration for one more like an HDTV. We also expect 4G LTE connectivity for Sprint, Verizon and AT&T. The iPhone 5 may also include better earphones.

Apple is also likley to announce a new iPod Touch, a 13-inch MacBook Pro with Retina Display and a new iMac around this event. The company may choose to quietly add some of these products to the Apple Store after it returns post event.

Rumors suggest Apple will start taking iPhone 5 preorders after the event wraps up, offering consumers the chance to lock in a release day delivery. While Apple is not confirming the release date, rumors point to a September 21st iPhone 5 release date.