The new iPhone, commonly called the iPhone 5, is in the works.

Apple has yet to confirm the iPhone 5 is in the works, but sources with ties to Apple insiders indicate that Apple is planning to announce the iPhone 5 on September 12th and release it 9 days later on September 21st.

Thanks to many leaks we have a good idea of iPhone 5 features Apple will introduce this fall.

After no design changes for the iPhone 4s, and sitting out of the race for faster connections and larger screens, the potential for upgraded iPhone 5 features is high.

Despite the prevalence of 4G LTE Android phones in 2011 Apple skipped including 4G LTE on the iPhone 4S. Then, in March Apple launched the new iPad with 4G LTE, and started adding iOS 6 features that work well on a fast mobile connection such as higher cellular download limits and this fall the ability to FaceTime video calls from a 4G LTE connection.

All of this points to a new iPhone with 4G LTE launching this fall. Apple will have a tough time convincing Android switchers and keeping iPhone 4 owners on board if there is no 4G LTE connection.

4G LTE offers 10 times faster downloads, which makes it possible to stream video at higher quality on the go, download games faster and more. This brings a new set of problems for users who might hit data limits faster, but it’s a trade-off many are willing to make. Check out the speed of 4G LTE on the new iPad in the video below.

Verizon, Sprint and AT&T are ready to support a 4G LTE iPhone on release in September. Verizon offers 4G LTE coverage for 2/3rds of the U.S. population, while AT&T and Sprint are building up coverage. Smaller carriers also support 4G LTE, which could bring the iPhone 5 to regional carriers swiftly.

This may not be the quad-core processor some are hoping for, but it will likely feature the same quad-core graphics that offer better visuals on the iPad 3rd generation and make games like Infinity Blade Dungeons possible.

With new versions of the same processor Apple routinely improves power management. The latest version of the iPad 2 boasts better battery life with the A5 processor. It’s possible that Apple will introduce a smaller, more efficient A5X processor with the new iPhone.

The ring around the smaller dock connector hints at a MagSafe style dock.

Recent reports suggest that the smaller dock connector will have MagSafe features. MagSafe technology is what allows Apple notebook chargers to attach in multiple ways. The technology uses magnets to keep the charger in place, and allows it to break away if something catches on the cord.

Apple could offer a magnetic charging cable that connects in either direction, making it easier to connect the cable.  A smaller dock could also play many other roles.

Leaked iPhone 5 parts and code in the iOS 6 beta point to a taller iPhone with a 4-inch display and a 1136 x 640 resolution. This is an increase over the iPhone 4S’ 3.5-inch display.

Rumors point to a new aspect ratio, which basically means the screen will look more like your HDTV. This new design delivers 17% more viewing area according to one leaked part, and room for an extra row of icons on the home screen.

Despite the increase in display size, the size of the iPhone looks like it will remain very similar.

The new iPhone may be just 6mm-8mm taller than the iPhone 4S. That’s the thickness of 4 to 6 U.S. pennies stacked. The leaked parts suggest Apple will increase the screen size without significantly increasing the size of the phone by reducing the bezels on the top and bottom of the iPhone. 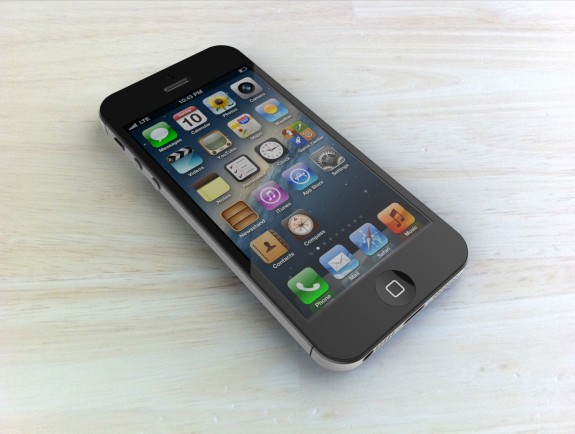 Possible look at the iPhone 5.

The most recent leaks suggest the iPhone 5 will be just 7.6mm thick. That’s slightly thicker than the Droid RAZR, and 1.7mm thinner than the iPhone 4 and iPhone 4S. Thin phones are impressive to look at, but with power-hungry 4G LTE we have to wonder if Apple couldn’t make better use of the 18% reduction in thickness by including a bigger battery.

Catch up on all the iPhone 5 rumors in one stop.