When iPhone 5 buyers open up their new iPhone boxes later this month, they might find a re-designed pair of Apple headphones, which are said to be smaller and more comfortable to wear.

MacRumors points to Tinhte.vn, a Vietnamese site which routinely posts videos and photos of new Apple products before the official release.

The site posts a video of what it claims are the new iPhone 5 headphones. There’s no audio in the video, but we can see the new headphones and a comparison to the current Apple headphones.

MacRumors provides a translation of the original audio,

In my hands are the new earphones for the iPhone 5 that is about to come out – Apple’s next generation of iPod [sic]. These will replace the current earphones that are on the market. These are manufactured at Phax Co factory in Vietnam. They have the appearance of a horse’s head, not like earbuds.

When they are worn, they have a much smaller profile. They have the appearance of a fully integrated, single unit – there’s no part that looks like it would come apart – not like earbuds; the integrated design is characteristic of Apple products.

Here I have the old earphones for comparison. The new ones are much smaller; when they are worn, they do not hurt the way earbuds do. You can see on the old ones the surface is a separate part that looks like it can be detached – not like the small surface of the new one.

The old earphones were mostly made in China, with some in Vietnam. But the new ones are clearly made in Vietnam. (Reading from the wires): “Designed by Apple in California, assembled in Vietnam.”

Unlike the current headphones, these new Apple headphones look to be a solid piece of plastic, like the Apple patent for unibody headphones. Apple patented a process to use ultrasonic binding to connect headphones so they feature, “a seamless unibody structure.” 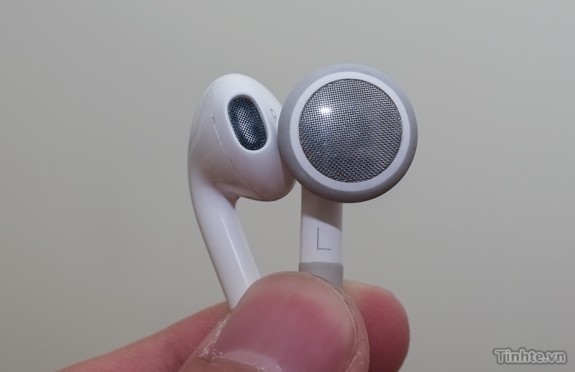 Both of the new earbuds feature a small opening on each headphone. The purpose of this opening is not clear.

Apple currently ships a pair of basic headphones with the iPhone. These headphones sell for $29 separately. Apple also offers a pair of in-ear headphones for $79.99 with better sound quality.

NPD research indicates consumers are looking for better quality audio on their tablets. Given the potential for a larger screen suited for movies, Apple could include better headphones with the new iPhone to offer more value out of the box.

We expect apple will announce the iPhone 5 with a larger 4-inch display and a 4G LTE connection on September 12th. The release is expected to follow on September 21st.