After Apple announces a new product the company quickly releases a video showing an executive talking about the new gadget on a white background. Adam Sacks takes this product pitch time and turns it into a pitch for the iPhone 5’s new photo and Siri features.

As it turns out, we all use our iPhones for one activity and one reason, so Apple’s new iPhone targets this, helping users.

“People only use iPhones to take Photos of their food. They’re sad and alone so they use pictures of food to create the illusion of a fulfilling life.”, states Greg Mansfield, fake Vice President of iPhone Product Design.

In this hilarious spoof Mansfield describes how the iPhone 5 will help users share photos of their food when real conversation is too hard, earning likes, tweets, tumbles and pins to build up a sense of happiness and even an illusion of fun.

In the video, the new iPhone is no longer a 7.6mm thin leaked part, but a DSLR camera with a 50mm macro lens to capture the essence of plates in poorly lit basement hipster food joints. 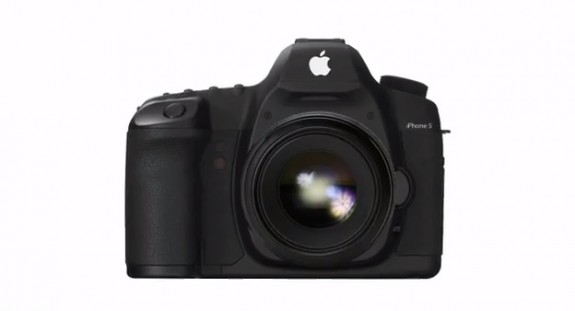 The new iPhone 5 is perfect for taking photos of food.

The video nails Apple’s product announcement videos, and is one of the funnier pre-release iPhone 5 videos we’ve seen.

While Apple will not comment on the new iPhone, we do know some potential details about the iPhone 5 release date and features.

Rumors and sources point to a September 12th iPhone 5 launch with preorders starting shortly after. The iPhone 5 release date is pegged for September 21st, with availability in store and online.

The new iPhone will likely include 4 LTE connectivity for faster uploads and downloads and a faster Apple A5X processor with quad-core graphics, capable of playing games with better graphics. Expect a larger 4-inch display if the leaked parts are legit, but the iPhone 5 size may not change much. Leaked parts show a slightly taller and thinner iPhone, but no additional width.

Apple may introduce a smaller dock connector with a magnet that allows users to plug the cord in from either direction.