After a dip from lower than expected iPhone sales in Q3 2012 investors pushed Apple stock to $664.75 — or about what a couple will pay for two 32GB iPhone 5 devices in September.

The rapid rise in Apple stock price rests on the shoulders of iPhone 5 rumors, which increase in frequency as the rumored iPhone 5 release date of September 21st approaches. Rumors of the iPad Mini and an Apple TV cable box also drive investors.

The all time high stock price isn’t just a record for Apple, it’s a new record value for a company. Apple’s $622 Billion market cap, what the company’s worth in stock, beats out Microsoft. Microsoft earned the title in 1999, months before launching Pocket PC 2000, so it’s only fitting Apple steals the crown with rumors of the new iPhone. 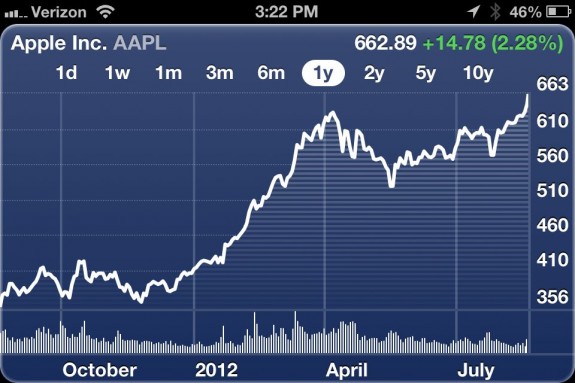 Expectations of a iPhone 5 release date in September play a large role in the stock push. If Apple launches the iPhone 5 on September 12th, starts accepting iPhone 5 preorders later that day and sells the iPhone 5 in stores on September 21st the company could sell 6 to 10 million iPhones in the first month according to Gene Munster of Piper Jaffray.

The iPhone 5 is rumored to feature a 4-inch Retina Display powered by an Apple A5X processor with quad-core graphics. Leaked parts, including the engineering sample sent by our source, point to a taller iPhone 5 with a new metal back.

We expect the new iPhone will use 4G LTE connectivity, offering 10 times the speeds of the current iPhone 4S. This paves the way for FaceTime over cellular and better video streaming while mobile, though data plans may not be ready for a 4G LTE iPhone.