Every new piece of hardware and every new software release contains bugs. Some affect lots of users. Some affect a small minority of users. Some only show up once users start adding applications and, well, actually using the new stuff the way users do. I’ve experienced such an iPhone bug with the iPhone 5s. Essentially, using the Share Sheet that Apple provides I can’t share anything to Twitter. However, I can share successfully to Facebook and other services. Note, this doesn’t affect all iPhone 5s users, but according to the Genius at the local Apple Store this morning this is an issue particular to the iPhone 5s and not other earlier model iOS devices and is going to require an update to firmware to fix. I can confirm that it is unique to the iPhone 5s in my own limited way, as I can share to Twitter successfully on other iOS devices I own. So, from what I can gather and what information the Genius gave me, if you’re experiencing this bug, you’ll have to wait for a fix from Apple HQ. 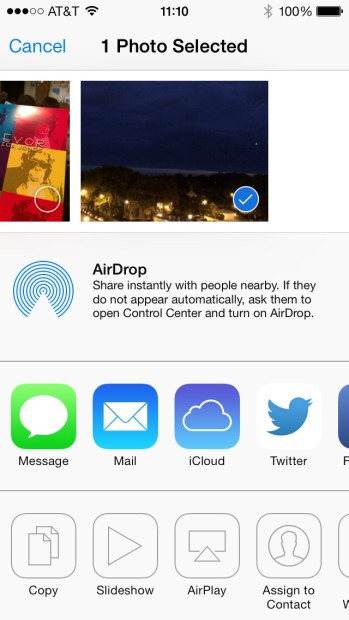 The iOS 7 Share Sheet as presented in the Photos App

That said, there are steps you can try to take (I’ve taken all of them to no avail) that some are reporting solve the problem for them. I’ll list them below. And obviously if you want to share something via Twitter there are workarounds like using the Twitter App, so I would classify this bug as an inconvenience. I’m guessing that won’t put it high up on Apple’s to do list.

So here are some things to try:

Apple gives Twitter, Facebook, Vimeo, and Flickr prime billing when it comes to setting up their accounts in iOS. Among other things this allows you to more easily share content to those services. When you get a new iOS device you can find and set up these accounts on the first page of Settings.

The first thing I tried (and it was the first thing the Genius tried as well) was to delete the Twitter account and then close down Safari. In both instances we also closed down all other running Apps. In case you don’t know, you can do this by hitting the home button twice and swiping each App card up and off the screen. In both instances after doing this we performed a hard reset by holding down the power button and the home button simultaneously. 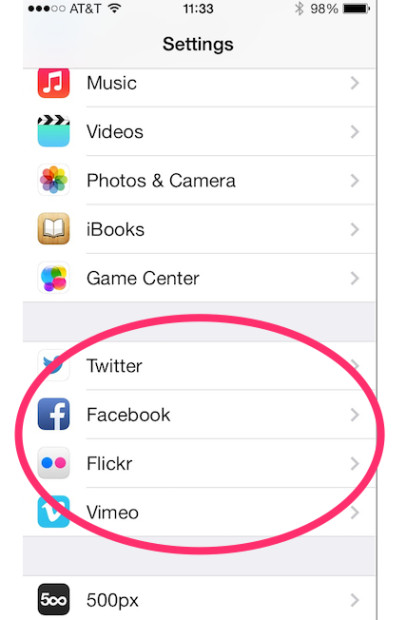 Once the iPhone 5s returned to life, I set up the Twitter account but got the same result. Others have reported that this method solves the issue.

Some have reported success with this method. If you go to Settings/General/Reset you are presented with a menu of Reset options as pictured below. Our next attempt was to Reset Network Settings. This clears all data relating to your network and radio settings such as passwords and starts things afresh on that level. Again, we saw no change here. 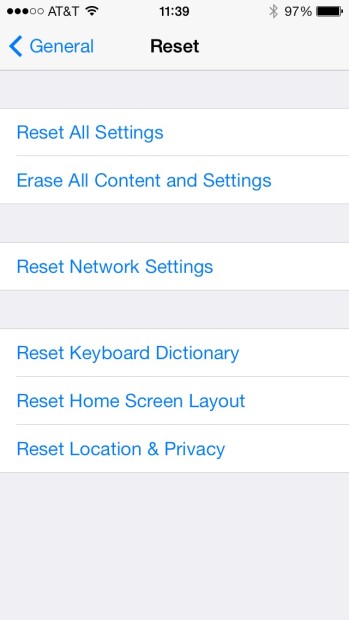 Again, I’ve seen a few reports that this fixes the issue for some. Under that same menu Settings/General/Reset you are presented with the an option to Reset All Settings. This wipes out more than just your Network settings, which means you’ll have a bit more patching up to do with passwords and such, but it doesn’t erase data or media stored on the phone. Again, no luck here. 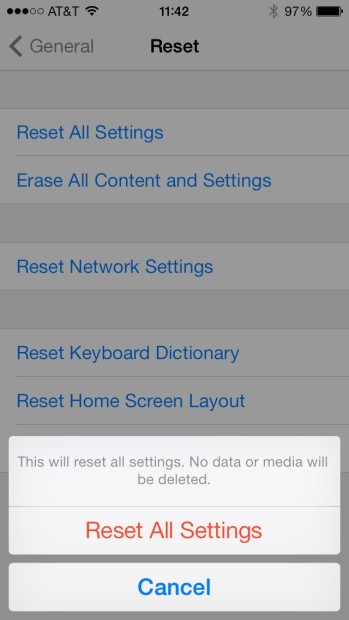 This is the nuclear option and it does exactly what it says. Everything is wiped from the phone. This is the option you should chose if you’re selling or giving your phone away before handing it over to a new owner. We didn’t perform this option in the Apple Store as I had already done it on my own. After that big wipe I still had the same result. If you do go this route for this or any other troubleshooting you might need to do, remember to set up your iPhone as a new phone and don’t restore from a backup. If you restore from a backup you’ll probably bring the problem back with that backup. Note, I had set up the iPhone 5s as a new phone when I got it which, in my opinion, with any new device is the best strategy. 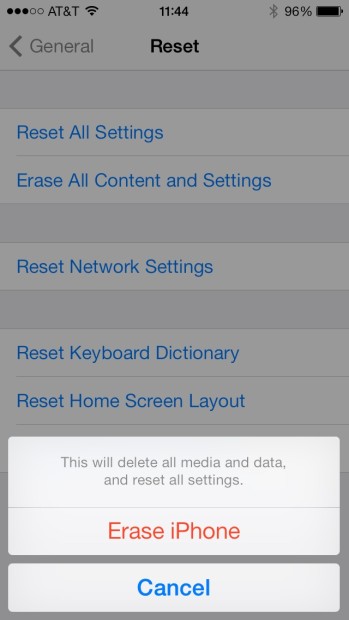 There are any number of things that can cause these kinds of bugs. Apps can come into conflict with one another (I have multiple Twitter clients on my iPhone, but note I also have multiple ones on other iOS devices as well); there can be firmware and/or software conflicts; something could have gone wrong during an update to a later version; the sequence of installing new Apps could have an impact. So, who really knows.

So, if you’re experiencing this bug and have tried the steps above, you’ll have to play wait and see while using workarounds. And honestly, this is really a “first world problem.” If one of the steps above solves the issue, that’s great. Let us know if you have seen this bug and/or have corrected it. It is one, that according to the Genius, which Apple is just starting to gather data on. That of course is the first step to getting it fixed.