iPhone Outsells All Android Phones Combined at Sprint and AT&T

Despite Android gaining ground, the iPhone is still selling very well. The iPhone might have even outsold all Android phones combined on AT&T and Sprint.

The stats come from All Things D, reporting on Canaccord Genuity estimates, which estimates that the iPhone is the top-selling smartphone on all three US carriers that support it. It has apparently sold so well on AT&T and Sprint that it has outsold all other smartphones combined on those carriers.

On Verizon, the iPhone faces competition from the Droid lineup. The iPhone 4S is still the top-selling smartphone on the carrier but phones like the Droid RAZR, RAZR MAXX, and Galaxy Nexus are also sell very well. But, according to these same charts, the iPhone 4S even outsells the combination of the RAZR and RAZR MAXX. 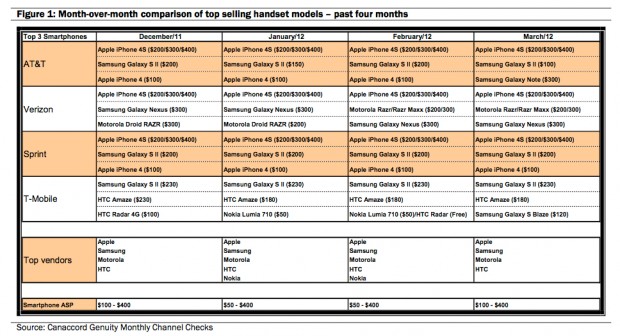 The iPhone sales aren’t all thanks to the iPhone 4S, however. All carriers also carry the iPhone 4, while AT&T also has the free iPhone 3GS. On both AT&T and Sprint, the iPhone 4 was the third best-selling smartphone for at least three of the past four months. The iPhone 4S was number one.

On both carriers, the Samsung Galaxy S II was the second best-selling phone all four months.

The sales data shows the iPhone on top, but Samsung dominates the rest of the board. Every carrier, including T-Mobile, had at lest one Samsung phone in the top three each month. It looks like Samsung is becoming the main competitor to Apple.

Others are trying to break into those charts, however. Earlier today, Nokia starting its ad campaign against the iPhone and, to a lesser-extent, Android.

While Nokia is mostly targeting Apple, Android seems like the platform that will suffer more as the Lumia 900 undercuts just about every flagship Android phone on the market.