Google is hoping that millions of Android users will jump at the chance to turn their smartphone into a wallet with Google Wallet, but based on the results of a survey by Retrevo Google is facing an uphill battle. Not only are iPhone owners more interested in a mobile wallet than Android owners, but only 21% of the surveyed users are interested in paying with their phones. The most surprising result from the survey was that most users would trust Apple or Google to run their mobile wallet over MasterCard, Visa and American Express. 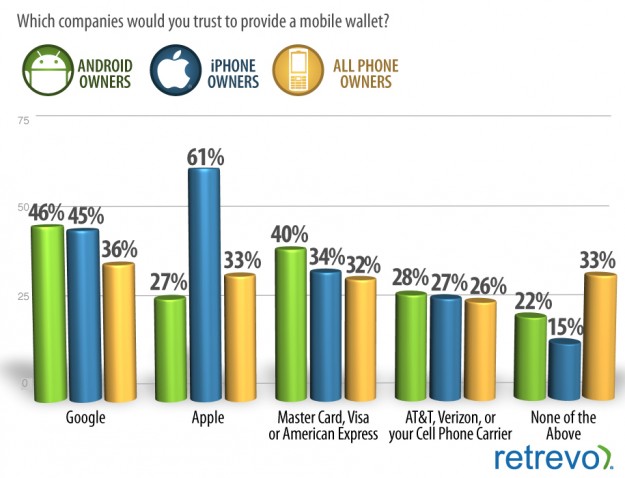 While the preference to have Google and Apple run their mobile wallet is a surprise, we aren’t shocked by the choice, especially given the numerous credit card breaches which reflect poorly on the ability of credit card companies to provide a secure mobile wallet. You’re not reading it wrong, iPhone owners would pick Apple to handle their credit and debit transactions over the current credit can debit card companies.

This preference also ties in closely with the mobile operating system currently in use by the respondent. This points to a desire to have a mobile wallet service built into the hardware and software, rather than added on with a case and a third-party app. 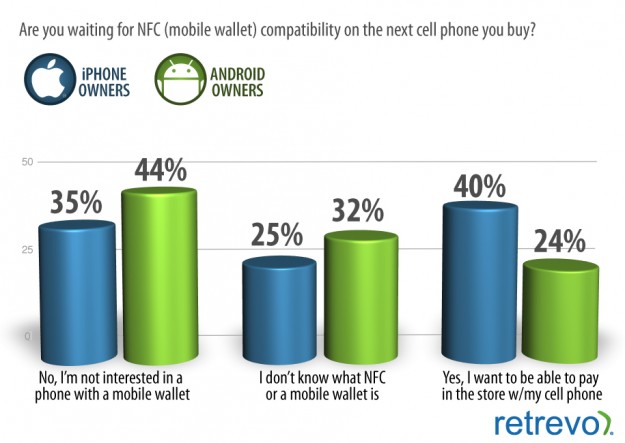 The survey also showed that 40% of iPhone owners are interested in NFC, or mobile wallet, technology built into their next phone, compare to 24% of Android users. This could pose an issue for Google Wallet if Apple decides to introduce NFC technology in the iPhone 5 and launch the Apple Wallet. If you think about it, Apple has an upper hand thanks to the 200 million iTunes users that have already shared payment information with Apple. 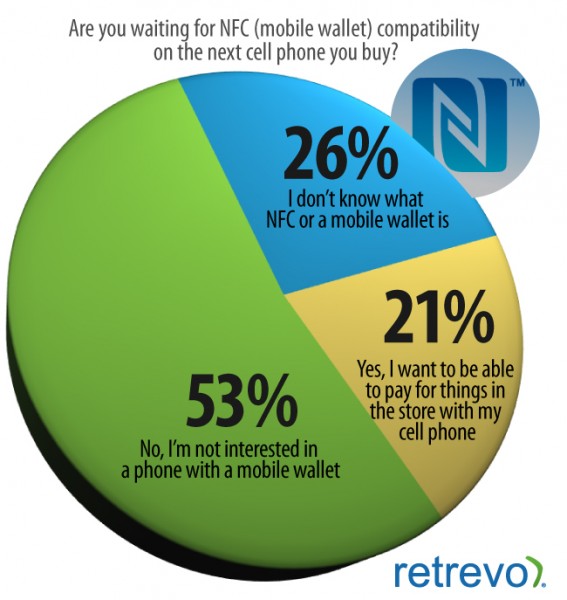 Unfortunately for those of us who can’t wait to start using our phones to pay, the bigger issue is gaining enough push from mainstream users to reach critical mass for merchants to accept smartphone NFC payments. How hard will this be? Considering that 26% of the respondents had no clue what NFC was and 53% aren’t interested in using their phone as a wallet — it’s going to be an uphill battle.

Even though we think Google Wallet has a chance at succeeding, the service will face pressure from users and retailers that don’t understand NFC. For Google Wallet and other alternatives to succeed it may take the power of Apple, and Steve Jobs, to explain to users why they “need” a mobile wallet. Perhaps we’ll see this in the iPhone 5.