Certain types of apps (such as emulators) are banned from the iTunes App Store, but one developer snuck in a SNES emulator trojan horse style by disguising it as a file browser for Dropbox and FTP, called Remote File Manager. The app works as advertised, with the ability to open a variety of file types, including SNES ROMs.

To get the secret SNES emulator working in the app, simply upload a SNES ROM into your Dropbox folder, and open it on your iPhone using the Remote File Manager app. It will detect that the file is a SNES ROM and will automatically launch the emulator so that you can start gaming away without wasting time.

We’ve tried the app out ourselves and it works rather well, opening up SNES ROMs without a fuss, although the touchscreen buttons are a bit iffy (as with all touchscreen buttons, really). However, you can play games in portrait mode, where the controls look like a SNES game controller, or you can play SNES ROMs in landscape mode, with the display in the middle and the buttons on the left and right sides of the iPhone’s display. The nice part is that the buttons are mostly out of the way, with only a bit of overlap; we can’t say the same thing for most other emulator apps out there. 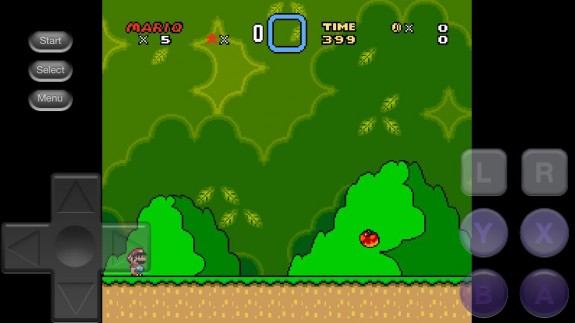 Other than that, Remote File Manager is kind of a useless app, as there are plenty of other apps like it that are much better, and the Dropbox app has its own file explorer anyway. However, I think what the developer is really getting at is the functionality of the hidden SNES emulator, including the auto-launch when a SNES ROM is detected, which is a really nice touch.

Surprisingly, Apple hasn’t caught the app yet, so it’s still available in the iTunes App Store, and it only costs $0.99. However, it’ll only be a matter of time before Apple catches on, so be sure to grab it now while you still can before it disappears. $0.99 is certainly a good price, considering that emulators on Android usually cost at least a few dollars each. Sadly, Remote File Manager only works with SNES ROMs, so your original NES ROMs are no good here.