When I bought an Android phone my first thought was how good it would be for playing music. I’ve been using iPods for years and my foray into iOS began with the iPod Touch the spring before the iPhone 3GS was released. I assumed that Android would not be as good as iOS for playing media. Android is a good platform for playing audio and some video content. There are fewer quality options for video. There is some greater possibilities now with Google’s newly announced music service and their movie rental service coming in the market. Those are forthcoming, but we will have to wait and see how good they are when they finally are available to the general public.

As we look at how hard or easy it is for iOS users to go Android, remember that this is not another “which is better” argument. Each platform has its benefits. The key to our examination is this – can an iOS users make the switch and be satisfied. We already looked at the initial out of the box experience in part one. Now we look at the one area Apple’s iPhone is probably best known for besides apps in general – being a great iPod in the package of a phone. 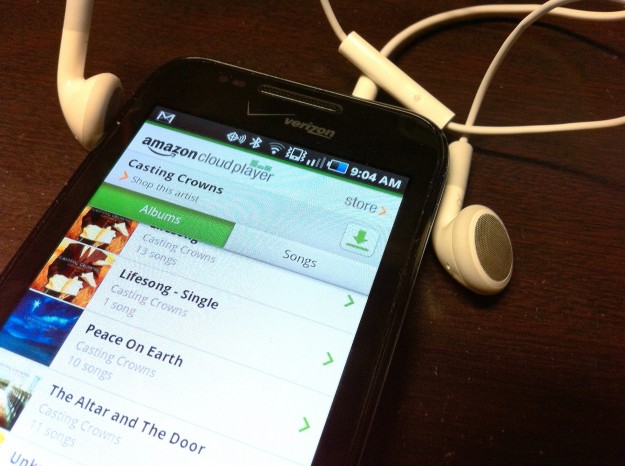 The one thing I’ve been disappointed about with iOS is wireless syncing of my music and podcasts to my iPhone. Users can always jailbreak and add this functionality, but why should they have to? This may be coming, but it should have been available a long time ago. With an Android phone this is possible now.

I know that you can buy movies, music and download podcasts on an iPhone without ever touching a PC – at least after the initial setup. The problem is backing that media up after you purchase or download it on the device. You have to plug the USB cable into a computer. The other issue is getting the music you already own onto the iPhone. There is one supported solution from Apple – iTunes. We also saw that you can use SugarSync’s great file backup and sync service by putting your music in a folder that you sync with SugarSync and play it through their iOS app. This works wonderfully. Most tech savvy users can handle jailbreaking to add wireless sync for a fee, but the mainstream user will never “hack” their phone. So, iOS users will actually find the move to Android a bit freeing, if they are willing to put forth some effort to set this up. 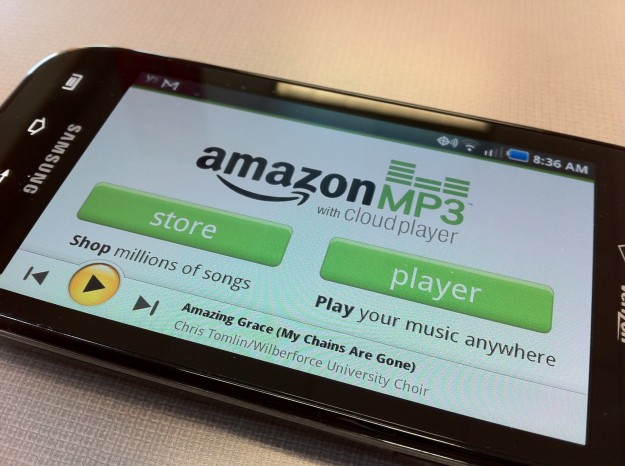 Amazon now supports iOS with its brand new Amazon Cloud Player service. It is not perfect, but it is usable. With an Android phone there is already a native application in the Android Marketplace and it is great, at least when compared to the newly supported iOS method of surfing with Safari or some other browser to the Amazon Cloud Player web site. There is no app in the iOS App Store and I bet there never will be. 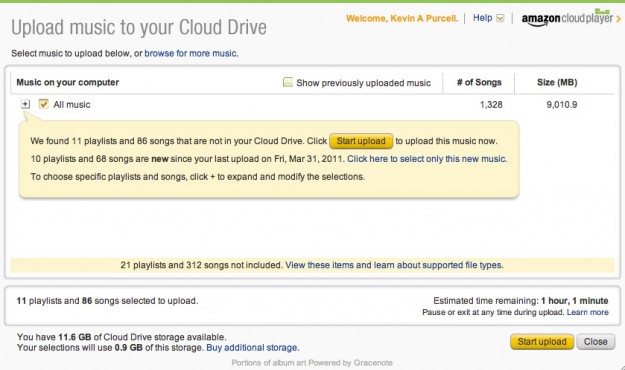 We  expect Apple to offer a similar solution based on iTunes and MobileMe rolled into one cloud music syncing and/or storage service. Until they do, realize that you can get all of your DRM-free music out of iTunes and into Amazon’s Cloud Player so long as you don’t mind uploading and don’t have too big a library. 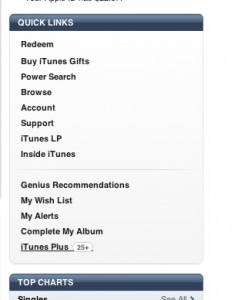 Remember that some of your older iTunes music purchased before Apple removed DRM in 2009 will not play in Amazon’s Cloud Player or the new Google Music service. You can upgrade most if not all of these albums by clicking on the “iTunes Plus” link in the bottom of the Quick Links menu in the iTunes store (see right). This will show you which songs or albums are eligible for an upgrade. Albums can be upgraded to DRM-free versions for $3 usually. Individual songs are usually $.30. After you finish upgrading your music, just run the Amazon MP3 Uploader (see above) and it will find all the songs. If you’ve already uploaded once, it will find only the new stuff you’ve just downloaded from iTunes.

If you do use Amazon’s service, you can either get extra free storage by just buying a single Amazon MP3 store album or by paying extra for extra storage. With the free 20GB of storage that you get by buying an album, we expect most users will find Amazon Cloud Drive sufficient. Since iPhone’s are either 16GB or 32GB and need room for apps and the operating system, we bet that you will be able to store most of the music you would have put on your iPhone on the Amazon service.

Google Music offers storage for up to 20,000 files for free. It will be built into Android in the near future, but for now Amazon is the best solution. We hope Google will work as well if not better once it is finally available.

Going forward, if you buy most if not all of your music from Amazon, then you never have to worry about getting music onto your device. It is there and ready to go in the Amazon app. Just make sure you download it and back it up on a computer in case Amazon’s service goes away due to either a glitch or legal issues.

You can also buy music through their Android Cloud Player app. So, if you have been holding back from making the switch due to playing music, don’t hold back. Thanks to Amazon, the Android side of things is just as good as the iPhone/iTunes solution and with wireless access even better.

As we said it is possible to sync music to your iPhone in unsupported methods if you are willing to jailbreak. You don’t have to root an Android phone (the equivalent of jailbreaking on the Android side) to get this capability. iPhone users who want to make the switch don’t even have to give up on iTunes thanks to DoubleTwist. The software uses your iTunes library to sync with the Android app found in the Marketplace. As a result you have wireless syncing of DRM-free music. The app on the phone is $4.99. There is a free version but it only works by connecting the phone to the computer via USB like you would with your iPhone. 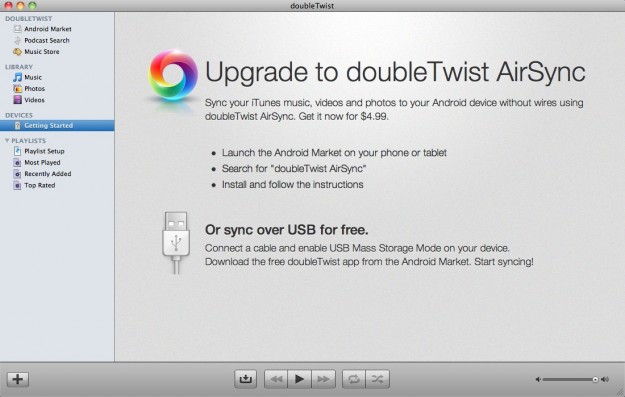 If you want to dump iTunes altogether, one solution might be the old favorite Winamp, which now supports wireless syncing of music between a Windows computer and Android. With WinAmp you would import all your music into the music player/organizer and it would handle the wireless syncing between the computer and the Android Phone just like iTunes does for the iPhone. The good news is both the media player on the computer and on the phone are free downloads.

As stated above you can always use DoubleTwist’s free versions to get USB tethered syncing just like you would with iTunes and an iPhone. If you use a Windows PC, most Android phones support Windows Media Play when using a USB cable for syncing media. The other options is to just do things manually by plugging the USB cable into the computer and using it as a mass storage device. You can copy things over from either Windows Explorer or OS X Finder. The built-in music player will find the files on the microSD card and play them. 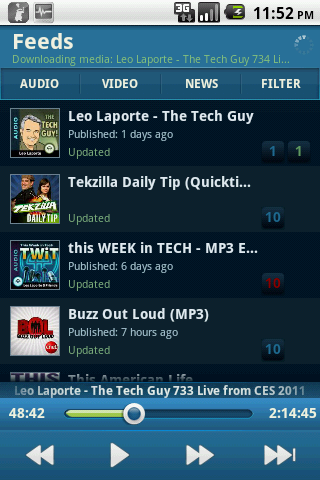 The only thing that I find iTunes and iPhone does better than the above solutions for Android is handling podcasts. I love to listen to and watch a lot of podcasts. With iTunes you subscribe and automatically download them. Each time I sync my iPhone they are automatically copied and deleted when I am finished listening to or viewing them. It works out of the box with just a couple of settings changes.

On the Android side you have to either manually copy them over (see Tethering via USB above) or find an App. For $6.99 you can download DoggCatcher Podcast Player. It has a database of popular podcasts and you can easily add them from that listing or by copying an RSS feed address into the player. Most of the podcasts I watch or listen to were listed.

DoggCatcher handles both audio and video podcasts. You can stream them or download them and listen/watch later. I have it set to only show podcasts that I have not yet viewed or heard so it hides the old ones removing clutter. There are free solutions, but I like this one and find that it works well and is simple to use.

If you go with DoubleTwist or WinAmp described above, you can use either of them to handle podcasts as well. DoubleTwist is free if you use USB tethering version and only $4.99 for an AirSync (wireless) capable version.

I prefer DoggCatcher since it takes the computer out of the equation. People switching from an iPhone will have to get used to doing things differently. The end result is a satisfying alternative which means this is not a reason to avoid the switch.

One thing you will miss if you go Android is some of the great video apps like Netflix and hulu Plus. They’ve been promised, but nothing is there yet. The hulu page of supported devices simply says “coming soon”. The problem with Netflix seems to be DRM, as always. That is not to say there are no video viewing solutions. mSpot has an Android app. There are also video players like VLC that will stream movies from your computer to an Android phone.

When Google’s new movie rental service through their market goes live, this will allow users to buy and rent movies. We hope it will be as good if not better than iTunes. But it is at least a few weeks to a few months away.

You can always rip your own movies to Android compatible formats and watch them using built-in media players. Many Android phones come with built-in media stores where you can buy or rent movies. The one on my Samsung Fascinate has a limited number of movies and they are very expensive, especially compared with iTunes.

If you watch a lot of Netflix or hulu Plus you will be disappointed and this could be a big hurdle to switching. Also, you iTunes purchased videos will not work thanks to the evil DRM that movie studies and TV networks require. DRM is just inviting piracy among honest people who want to buy movies and tv shows and play them everywhere.