A report by ComScore indicates that the percentage of data used by iPhones for Wi-Fi is more than double that of Android phones in the US. According to the data, 47.5% of iPhones’ traffic is over Wi-Fi, compared with only 21.7% for Android phones. 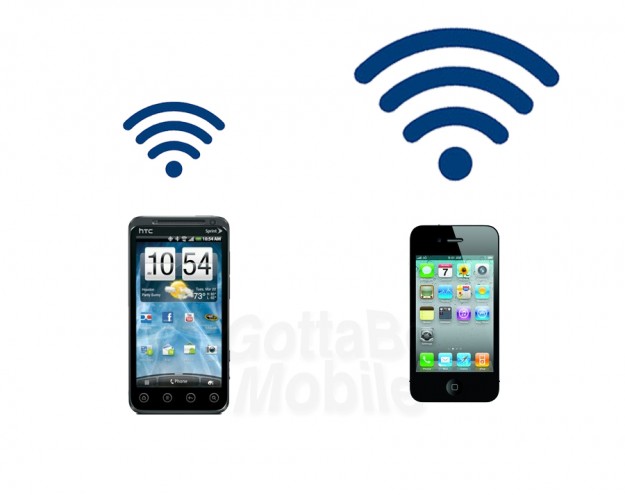 This may be surprising to hear at first, but there are a couple of simple reasons that can explain the large gap:

While the iPhone is now on two different networks in the US, Android phones are on all of them. Verizon’s iPhone only became available earlier this year. The majority of iPhones are still on AT&T.

AT&T has been on tiered data plans for over a year now. With the other networks still on unlimited contracts (though the clock is ticking) a much larger portion of iPhone users are forced to be much more data-conscientious. Of course WiFi allows you to surf and download to your heart’s content without a worry about overages. This is likely the single largest reason for this discrepancy.

In addition, AT&T’s service has been notoriously spotty in certain cities – particularly inside buildings. Many of those buildings will have at least one WiFi connection readily available. What better way to remedy the situation than to hop on the WiFi?

More calls are even being handled over Wi-Fi now, with VoIP services like Skype, Fring, and various SIP providers easily found in the AppStore. One service, Line2, has centered much of its marketing around the promise of handling calls for those with shoddy AT&T coverage.

If I have an LTE-powered Verizon phone, it can bring download speeds of over 20Mbps. Some users’ mobile data speeds may actually be faster than their home Wi-Fi network. Why bother connecting to the wireless network?

Of course all of the networks have something that they describe as 4G, and there are multiple Android phones for each of them. All of this adds up to more fast mobile data on Android handsets – which leads to more people who think of Wi-Fi more as an afterthought.

With data-intensive apps like Netflix now available on many Android phones, why not use your unlimited 4G to stream? More iPhones may have Netflix installed, but streaming Iron Man 2 over an AT&T connection doesn’t sound like much fun. If it’s available, many iPhone owners will opt to grab a Wi-Fi connection.

Some Android users may even see the opportunity to cancel their home internet altogether, and use their LTE hotspot as their primary home internet. If so, that will likely change very soon with the introduction of Verizon’s tiered data plans.

Having a more open operating system than iPhones, Android handsets can easily download pretty much anything they want from the web. They also have easy access to the phone’s file system (or most of it, for non-rooted phones). They can open a wider variety of file types than iPhones. This could lead to more heavy downloading on the go for Android users.

Does the iPhone need 4G?

With iPhone folks spending so much time on WiFi, this begs the question: is there any need to bring 4G to the iPhone? If iPhone owners are using local wireless networks for almost half of their total data, how important is it to get download speeds up higher than the 1.5-3 Mbps they now get over 3G?

You can bet that this a question Apple execs have been asking themselves over the last 12 months. Most suspect that we won’t see a 4G iPhone until 2012, and these statistics suggest that may be a good idea. If AT&T’s spotty service plays a big part in this WiFi use, then iOwners don’t need faster download speeds – they need better coverage (some would say with a smirk that they need Verizon).