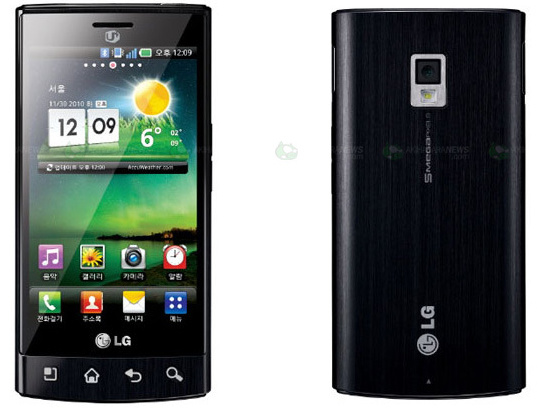 LG isn’t one to let its Korean rival Samsung bask in all the Android glory, and the LG LU3000 is an Android smartphone that demonstrates that LG can give Samsung a run for its money with the latter’s Galaxy S series Android handsets. Unfortunately, though, the LG LU3000–besides an unfriendly naming convention with a string of letters and numbers–will only be available in the Korean market and may never make it Stateside.

That said, U.S. technophiles can dream about the 3.8-inch WVGA resolution IPS display, which like the iPhone, iPod Touch, and iPad, promises a better viewing angle (compared with the 4-inch Super AMOLED touchscreen panel on Samsung’s Galaxy S). Moreover, it is powered by a 1 GHz Texas Instruments OMAP 360 processor (compared to a similarly clocked Hummingbird processor on the Galaxy S) that’s capable of 1080p HD recording (Galaxy S does 720p HD recording) with its 5-megapixel camera and LED flash along with HDMI output.

The processor is zippy, as demonstrated in some early testing against the Galaxy S and the iPhone 4.

All this is powered by Google’s current version of Android, version 2.2, which is also known as Froyo. Android 2.2 is the first version of the Android OS that allows for playback of Adobe Flash content.