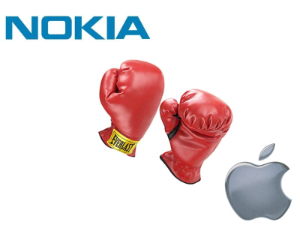 Nokia iscontinuing its legal battle with Apple as the Finnish phone-maker has filed another patent dispute against the iPhone-maker over intellectual property. On the consumer-facing fronts, companies may appear to best each other on features, experiences, interfaces, number of apps, and developer support for their respective mobile platforms, but behind the scenes there is a cold far being fought over who owns what technologies that go into devices.

For Nokia, which has seen its market share shrink since the introduction of the Apple iPhone and numerous phones running Google’s Android operating system, this behind the scenes war becomes critical as winning the war could help the company proven itself once again as market leader and also either monetize its research and development efforts through licensing deals or hinder advancement of rival platforms by legally denying them entry into the market over illegal use of Nokia’s intellectual property.

In a statement to the Wall Street Journal, Nokia says that it is merely protecting what is rightfully theirs: “For us this dispute with Apple is nothing extraordinary, just an instance where one company has refused to pay its fair share for the use of technology we’ve contributed. … We have started legal proceedings to enforce our legal rights on our intellectual property in order to get proper compensation, that’s the gist of it.”

Battle over IP in the smartphone space is nothing new. Microsoft, which had made the Windows Mobile operating system and is now forging its future with Windows Phone 7, had strong-armed hardware makers who create Android smartphones into licensing core IP that Microsoft owns and says that Android violates upon. As such, partners like HTC, which makes Android and Windows Phone 7 devices, are caught in the middle of a war between Microsoft and Google. For HTC and others, licensing core IP from Microsoft to use in Android shifts the market as Android, marketed by Google as an open-source free-to-use OS, no longer is free as it is marred by licensing fees.

There is a twist, however, in Nokia’s most recent battle with Apple.

In the past, patent disputes centered around essential technologies that patent holders are obligated to license out to create technological standards. This is important as the industry–and consumers who use the technologies–like to see standard ports, memory card support, and other hardware characteristics like micro USB, SD card, WiFi adoption, and GPS radios.

The twist in today’s patent battle is that it centers around technologies that patent holders, like Nokia, are not obligated to license out to rivals, like Apple. These non-core technologies do not make or break a smartphone, but serve to add value to the handsets and are sometimes seen as more valuable than than the core IP that patent holders are obligated to license to others.

“We see some of our patents that we are not obliged to license being used by our competitors, adding significant value to their products,” the company says, “It is increasingly important to collect that value from the competitors to the extent that they are using those patents.” According to the Wall Street Journal,

With the on-going dispute over intellectual property, it is interesting to see Nokia partner with Microsoft on Windows Phone 7. In the past, as part of a benefit of being a Microsoft partner and maker of handsets running Microsoft’s mobile OS, the Redmond, Washington software company had promised its OEMs that it would protect them in any patent litigation. In the Windows Mobile days, Microsoft had publicly guaranteed the following protections to partners in an effort to sway handset-makers from building on rival mobile platforms:

The combined multi-decade experience that Nokia has in the mobile industry along with Microsoft’s IP, the partnership between the two firms in the war of ecosystems should prove to be interesting, if not fruitful. Though the war with Apple has been fought long before Nokia’s partnership with Microsoft, it does beg the question if Microsoft is being more generous to Nokia in its deal as a vehicle to fight Apple. This way, Microsoft could still play nice with Apple publicly, but a Nokia-Microsoft can legally go after the iPhone and hope to both steal market share as well as thwart Apple’s developments.

There are still lingering questions–as the deal is still being structured–on whichIPs will get licensed and shared between Nokia and Microsoft. However, the combined IP portfolio of a Windows Phone-powered Nokia will be strong enough to scare away the new generation of mobile titans.

Since 2009, Apple and Nokia have been in hot pursuit of each other in court over patents. Nokia had filed the first round of lawsuits, claiming that the iPhone and iPod Touch had infringed on 10 Nokia patents. Since then, Apple had counter-sued and Nokia had added more patents and the iPad as a product that violates essential technologies that Nokia holds rights to.

As Nokia has twice as many patents as Apple, one possible outcome would be that Apple license those technologies from Nokia. Nokia has spent over $61 billion over the last twenty years to hold over 10,000 patents. As technologies, experiences, and other factors produce value in the mobile space, the mobile war may be shifting from the market place to the courtroom.