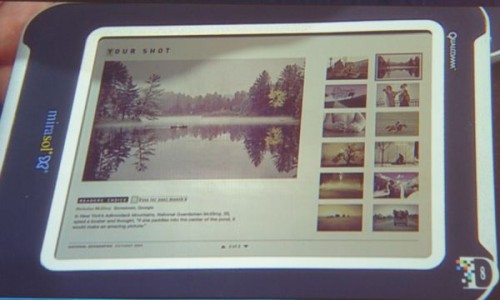 eReaders like the Kindle already blow the iPad out of the water in terms of  battery life thanks to their eInk displays, but they don’t come close to 1,000 hours. As with most battery claims/predictions, I’m skeptical of Jacob’s claim of 1,000 hour battery life, but it kind of got my imagination rolling. A 1,000 hour device may be a pipe dream today, but it may be a reality in years to come.

One reason I use my iPad a lot more than I’d expected to is because of its phenomenal battery life. I can go days between charging it when I’m using it lightly. I don’t have to rush off to charge it when the 20% battery warning hits because I know I have at least an hour and a half of juice left. It outlasts any other battery-powered device I own.

A 1,000 hour (about 6 weeks) device of any kind could really change how technology is used. For example, students could be given an eReader loaded with all of their textbooks at the beginning of a semester and never have to recharge them. Patients’ charts could be “always-on” for hospital staff.  Architects could hand off digital blueprints to contractors that could be toted around a job site and stowed in a toolbox, just like real blueprints, without having to charge the device until the project is done.

eInk displays like the Mirasol Display certainly don’t look as pretty as the iPad’s display, but a lot of applications don’t require high-quality photos and video.