Is the Nexus S Disappointing? 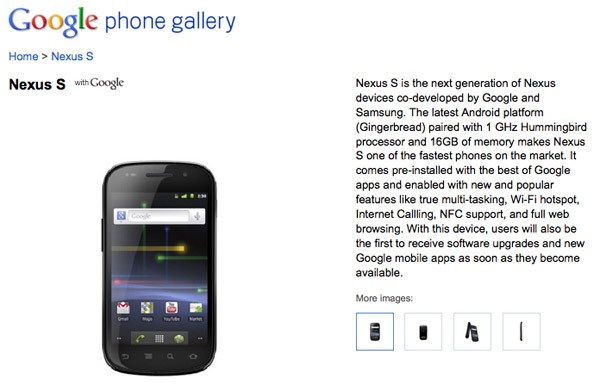 Google has gone ahead and made the Samsung Nexus S page live, making the second milestone in the Nexus product line. Google’s revealing some specs, which include WiFi tethering capability, WiFi calling, NFC support, 16 GB memory, and a 1 GHz Hummingbird processor along with a curved display. The specs of the next-generation Google co-developed phone is in line with current generation Galaxy S smartphones, such as the Sprint Epic 4G, AT&T Captivate, Verizon Fascinate, and T-Mobile Vibrant. The question, though, is whether these specs are worthy of a Nexus moniker?

The Nexus Legacy:
Google’s aspiration of its own self-branded product line resulted in a partnership with HTC to create the original Nexus One, a smartphone that Google had hoped at the time would help set the benchmark for Android phones. The device came with an AMOLED display, which was only beginning to take off at the time; a Qualcomm processor, which was at the time among the first smartphones to use the Snapdragon chip clocked at 1 GHz; and an easy path to push out future Android upgrades, which had to pass through OEMs and carriers previously.

The Nexus One, basically helped to shape and define the Android hardware market, setting the benchmark for high-end Android phones at 1 GHz of processing power–today we’re seeing Qualcomm, Texas Instruments, and Samsung chips from high-end hardware at that clock speed–while defining the slim and sleek profile as being a desirable form factor.

The Nexus S:
Samsung’s Nexus S is coming to market at a time when there are already numerous devices on the market running a 1 Ghz processor. As an official device that’s “co-developed by Google and Samsung,” I think a lot of developers–and Android prosumers–are expecting more. Having the Nexus moniker should compel the joint venture to push out an industry-defining product using technologies that may be popular tomorrow rather than sticking with the tried and true of yesterday. Given that the single-core 1 GHz Hummingbird processor has already proven successful, perhaps Samsung and Google should be thinking ahead and defining the market for high-end phones with dual-core 1 GHz processor, a market that NVIDIA is helping to define in the mobile space right now. The device had the potential to be among the first Android device with a dual-core chip, but that dream is now unrealized. For now, it seems that the Nexus S is only capitalizing on proven technologies and isn’t really taking any new hardware risks on the market aside from the NFC chip.

Aside from NFC technology and a curved display, there isn’t a lot in the product description that distinguishes the Nexus S from the Galaxy S series of smartphones on the market today from a hardware perspective. While NFC will likely take off in the coming year(s), and the hardware will inspire software and applications that we haven’t conceived of today beyond using it as a sensor for mobile payment, it will take a while before there’s enough adoption of the near-field communications technology for any practical use of having the NFC sensor embedded in the phone.

WiFi calling and WiFi tethering are all features that have been supported on one device or another in the past, and those features are not new nor revolutionary. Built-in memory and multitasking support is also something that’s been supported on Android and a variety of other platforms, including Symbian, BlackBerry, and webOS. And a full web browsing experience? Well, a decent web browser with Adobe Flash 10.1 support already is available on the market on many current-generation Android 2.2 devices, including the Nexus One.

Where the Nexus S will shine is in software. It will probably be the first device released with the next-generation Android operating system, which will mean it will be the first with Android 2.3. Android 2.3, also known as Gingerbread, is said to bring some refinements to the current Android 2.2 Froyo OS and will be an evolutionary upgrade.

So will the Nexus S be an industry-shaping device like the Nexus One? Probably not. However, that said, with Google’s push behind NFC, we can expect to see more applications for near-field communications technology that will pave the way for mobile phones to have embedded information, such as credit card payments, so you can pay for goods without having to lug around your wallet. For now, though, users of high-end phones may not find a compelling reason to upgrade yet to the Nexus S–especially those who already own a Galaxy S smartphone–unless they are really investing in the curved display and embedded NFC sensor.

To learn more about the Nexus S and see the official pictures, you can always go to Google’s official product page.