A new Samsung patent may give us hints as to what Samsung is envisioning for its flagship smartphone range as it moves away from the plastic body construction to more premium materials to stay competitive with rivals HTC and Apple. Whereas LG and Sony have both been using glass on their current flagship Optimus G and Xperia Z respectively, Samsung has been rumored in the past to consider metal for the body of its Galaxy S4 smartphone, but scrapped the design at the last minute as it wouldn’t be able to make and deliver the product in time earlier this year. However, not all was lost as a future Galaxy S smartphone product could still bear the metal torch for Samsung, and we may be seeing glimpses of what may appear to be an all-metal Galaxy S5 flagship design. 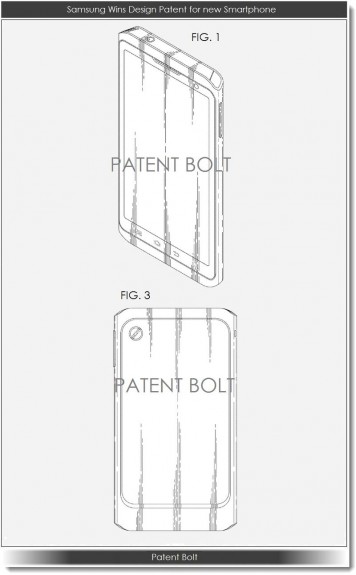 In reality, the sharp edges and angled sides, coupled with what appears to be plastic end caps at the top and bottom edges in an effort speculated to boost cellular and wireless reception, all remind me of LG’s Optimus G design. Whereas the LG Optimus G uses a similar glass sandwich approach similar to Apple’s iconic iPhone 4 and iPhone 4S designs, the Samsung patent shows off a phone with a similar approach but presumably with metal.

The patent shows that the frame of the phone would be constructed from a single piece, which would give the unit for strength. Additionally, there is a front cut out for the glass touchscreen display. A rear cutout panel would house the battery door, and from the appearance of the rendering, it looks like users can slide the panel down to reveal the battery underneath.

If this is correct, then that means that Samsung may be able to still deliver features like a removable battery and a micro SDXC memory card slot. 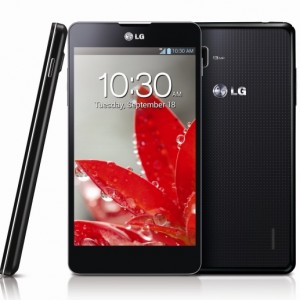 Similar to LG’s Optimus G design? Swap out glass for metal, and we may have some similarities.

No other details were given from the patent filing, which was initiated in February 2012, so we don’t know exactly what the internal specs will be for.

It’s unclear if Samsung will use the design, or something closely resemble this design, in the Galaxy S5 that would launch in the first half of 2014 or on a future Galaxy S smartphone, but the design is not unattractive and is a departure from the plastic construction that Samsung has so far employed and has been criticized for.

When the company debuted the Galaxy S4, I met with Samsung’s team in San Francisco, California. The team noted that while it had considered other materials, the Galaxy S4’s design was ultimately chosen because it supported powerful features, like a battery that can be swapped out if depleted and a removable storage card so users can add more memory.

In contrast, HTC chose a zero-gap aluminum construction for its competing HTC One, which launched at around the same time as the Galaxy S4. The company opted for a fixed battery and for fixed storage, a move that was criticized by power users who demanded more from their phones.