So, we’ve broken down the Samsung Galaxy S II launch in the United States by carrier. We’re still 100% we know what’s going to happen during this month and the next but we’ve got a fairly good idea. There is one complete mystery though. T-Mobile has yet to have any sort of a credible leak when it comes to its Galaxy S II launch.

We’ve seen a host of stuff surface about the devices bound for AT&T, Sprint and Verizon but mysteriously, nothing for T-Mobile even though we heard, from the company itself, that we’d see a Galaxy S II device.

I’ve speculated that this could be because the Magenta carrier is actually going to be releasing a phone called the Samsung Hercules as its Galaxy S II device, a device that is said to be able to handle HSPA+ 42Mpbs speeds. Now, I’m going to speculate again. 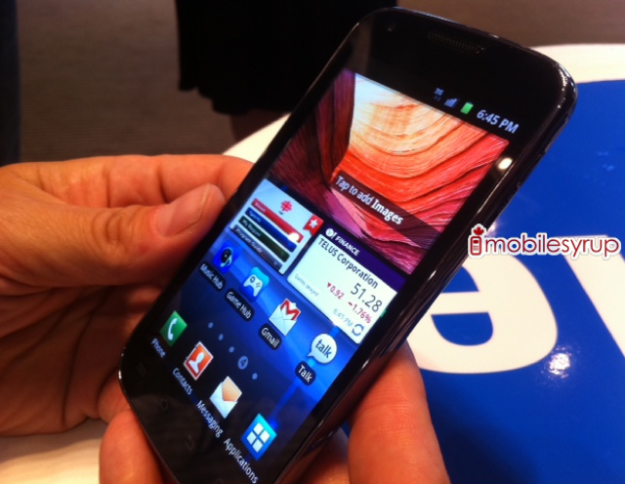 A photo of a phone that’s bound for Canadian carrier TELUS has surfaced today in a spy shot taken at a VIP event. According to Mobile Syrup, it’s the “Galaxy S II Hercules.” Well, that’s interesting. Here’s the deal.

This phone looks amazing. It’s apparently a cross between the Galaxy S II, Nexus S and Samsung Infuse 4G. That’s a combo made in heaven to most people. It has a massive display that may or may not be 4.5-inches, a supposed 1.2GHz dual-core processor, a 8MP rear camera, a front-facing camera, Android 2.3 Gingerbread, and oh, guess what? It could be Canada’s first dual carrier 42Mbps smartphone.

So, again, this is purely speculation on my part, but that sure sounds like a possibility for T-Mobile’s Galaxy S II. It’s made by Samsung, it has Galaxy S II and Hercules in the name, and is probably capable of running  42Mpbs speeds. T-Mobile’s Hercules is also rumored to be coming out in September, same time as Sprint’s Galaxy S II.

It’s also possible that this could just be a TELUS exclusive device but with those specifications, I doubt it. So what do you think? Is this T-Mobile’s Galaxy S II? And if it is, would you buy it?