Is This the Sprint Moto X?

The Moto X figures to be Motorola’s first big smartphone release of the year when it arrives later on this summer. And while the device is official, many details remain unclear, including its looks. Today, the Moto X for Sprint, also known as the XT1056, may have leaked out in a photo offering consumers their first clear glimpse at an American variant of Motorola’s upcoming device.

Earlier this year, Motorola finally put speculation to rest by announcing the new Moto X, a device that had seen all sorts of rumors in the months leading up to its announcement. However, while it did in fact announce the new Moto X, it did not reveal many of the devices details including its final design, its carriers, its price, its full software, its full hardware or its release date. 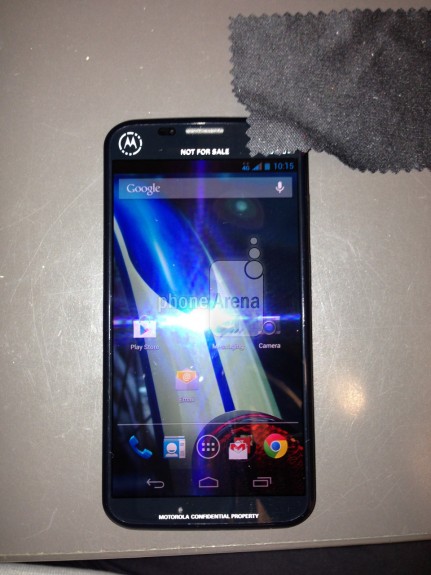 This is thought to be the Moto X for Sprint.

That doesn’t mean Moto X information hasn’t been leaking to the surface though. In fact, we’ve seen the device, or what is thought to be the device, pass through the FCC on its way to four American carriers including AT&T, Sprint, U.S. Cellular and Verizon. If true, and it could be considering Motorola said that it would be releasing the device on more than just one carrier, it would be a departure from the Motorola of old.

In addition to the FCC filings, it appears we have our first look at an American variant of the Moto X with PhoneArena issuing what appears to be a photo of the XT1056, also thought to be the Sprint Moto X.

The new leak looks a lot like the old ones.

The device, which appears in the wild, looks a lot like the leaks we’ve seen in the past, only more clear. The device in question has rounded edges, a Motorola symbol in the top left corner, and it’s said to be running Android 4.2.2, have 16GB of storage and a removable battery. The removable battery would be key for many buyers, if real.

The device’s display is thought to be somewhere around the rumored 4.7-inch display that we’ve heard about already. It’s unclear when this device will be hitting Sprint’s 4G LTE network but given Motorola’s end of summer timeline, we imagine that an announcement likely isn’t too far off.

Motorola is also expected to offer consumers the chance to customize their device though those options have yet to leak to the surface in the wild. The Moto X will also carry powerful, smart software though the exact nature of the software remains a bit vague at this time.