We have all known for a while now that Amazon has a tablet in the queue. Today the Wall Street Journal shed some more light on the subject with word that the slate will be arriving “by October.” So we decided to put our Photoshop skills to use and show you what we think the tablet could look like: 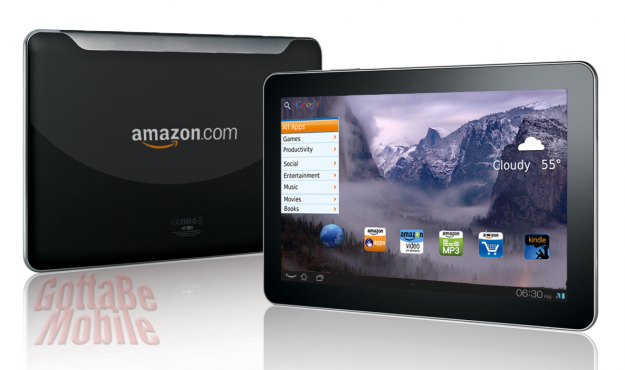 We have said before that an Amazon tablet could have what it takes to hold its own against the iPad. When streaming media, retail discounts, and a low price (subsidized by digital content sales) are all possibilities, they could be offering an attractive package for holiday shoppers. If they hold to their recent pattern of releasing ad-supported versions of their Kindle eReader, we may even see an ad-supported version of the tablet.

According to the WSJ’s report, the tablet will have “roughly a 9 inch screen.” They said the device would not have cameras -which could be interpreted as a sign that they’re going for typical Amazon rock-bottom pricing on it. They also expect the device to release in the third quarter of this year, meaning sometime before the beginning of October.

If the rumors are correct and Apple is launching a high-end version of its iPad, though, the timing may not be the best for Amazon’s tablet debut. While it may get some extra headlines from those comparing it to the “iPad HD” or “iPad Pro,” anything Apple-related is likely to dominate news cycles in a way that wouldn’t benefit the online retailer.

Of course this image is an artist’s rendering, and our concept is likely a different beast from what Amazon is planning. However, with the appealing design direction that they’ve been taking the Kindle, we would expect to see a sexy device come September (or thereabouts).

Would you buy the Amazon tablet if this were how it looked? Would it stand up to the iPad? Let us know in the comments!