Apple at its iPhone event today has announced that its iTunes cloud music matching service, dubbed iTunes Match, will be coming at the end of October for an optional annual subscription price of $24.99. Essentially, iTunes Match will scan your iTunes library and automatically re-create your music library in the cloud, negating the need for users to self-upload their tracks to the cloud, unlike with rival services from Amazon or Google. The service will only upload songs from a user’s iTunes library that aren’t found in iTunes database. 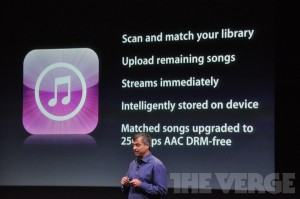 Image from Apple event courtesy of The Verge

For $24.99 a year, iTunes Match will make it easy for users to access their massive library of tunes from anywhere where they have an Internet connection. Available as part of iOS 5 and OS X Lion, the service does have its draw backs, however.

Unlike with competing services that allow users to stream music to their devices, early developer previews of iTunes Match with iOS 5 reveal that the song will actually get downloaded to the device rather than get streamed. However, as songs are cached, they will play nearly immediately. The downside here is that to listen to a track, you will have to download it, which kind of negates the space-saving on-device storage feature of cloud storage and streaming, but perhaps Apple hasn’t been able to fully negotiate full legal rights to streaming at this point.

An exact release date was not disclosed, but the service should go live by Halloween for $25 a year for those who are attached to their tunes but don’t necessarily want to decide on which ones to synchronize to their devices.