Apple just announced iCloud, a new online service that provides easy access to all the music users have purchased through iTunes for free. Apple has also announced a service called iTunes Match, which will match the music you have ripped or purchased from other stores and add a high quality version to your iCloud library without the need to upload. iTunes Match will cost $25 a year for matching and access to your files, so we decided to see how iTunes Match compares to the competition like Amazon, Google Music, DropBox and SugarSync. 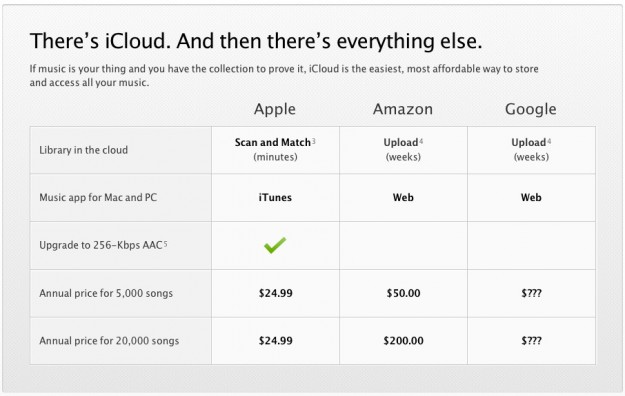 In some ways Apple’s new service does best the primary competitors Google and Amazon, as Josh Smith reported. However, looking at it purely as a back-up and streaming service for your music, iCloud needs a closer look.

As the chart above shows, the annual cost of Apple’s service for 20,000 songs is still $25, beating Amazon by about $175. When it comes to the 5,000 song comparison vs. Amazon, Apple conveniently leaves off the current deals on storage. We don’t know the cost of Google Music because it is still in beta to make a full comparison yet. It is very likely that Google has intentionally kept pricing information quiet so as not to tip their hand to competing services.

Another problem with Apple’s comparison is they don’t compare iCloud and iTunes Match to other services with similar functionality, like DropBox and SugarSync.

DropBox gives you 2GB of storage, and for $.99 you can get an app called BoxyTunes that will stream all of your music for you. The combination matches the functionality of Apple’s service with one exception – you will have to upload your music while Apple just checks your library an automatically populates your account with the songs it finds. With DropBox, if you need to add storage, then 50GB is $9.99/month or $99/year. That is four times the cost of Apple’s annual service fee and half that of Amazon’s. DropBox has the added benefit of being able to get even more storage if you need it for a cost. They also offer free upgrades if you recommend others who sign up.

SugarSync also has a free level that it offers 5GB of storage, more than twice that of DropBox and Amazon’s free service. For many people, 5GB will be more than enough. If you do need more, then you can upgrade to 30GB for $40/year. This is $15 more than iTunes Match and much less than Amazon and DropBox. You don’t have to get an extra paid app, as the music streaming is built into the free SugarSync iOS app. Even higher levels of storage are also available and like DropBox you can earn added storage if you get friends sign up. 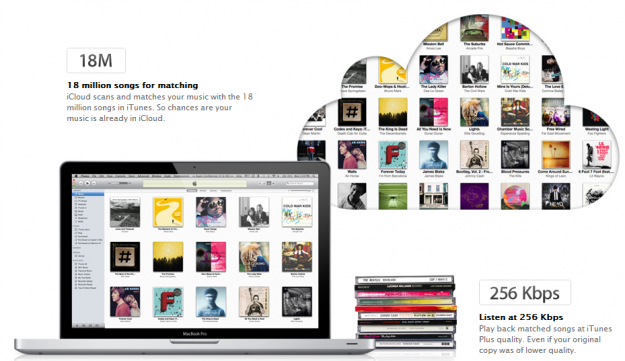 Remember that Apple’s service is only going to charge the $24.99/year if you want to match your current music collection which has non-iTunes songs. If all of your music came from iTunes in the first place, then it will be available to you without payment. iTunes Match is only for those who have a library of music that comes from sources other than iTunes – like ripping CDs or songs you bought from Amazon.

What Apple doesn’t mention is that you can get 20GB of storage from Amazon for the cost of just one Amazon Music album per year. In some cases that can be as little as $5. If you bought the latest Lady Gaga album when they offered their promotion, then you got 20GB for only $.99. So, $50/year price tag in the Apple chart above is disingenuous on the part of Apple.

If you are an Apple only user, iTunes Match is a great option. Only $25 adds some pretty good functionality and won’t hurt too many wallets. If you use more than just an iOS device (you have an iPad and an Android phone) then using something like SugarSync might actually be a better option since it works well, offers plenty of storage for a decent price, and is mobile OS agnostic with good apps for almost every mobile device out there.

Amazon’s Cloud Drive is also compelling, but the music streaming service from Amazon works through the mobile web as there is no iOS app yet. You can buy music from Amazon and import it easily into iTunes for easy syncing to your iOS devices. The Apple service will still offer some benefits because you could then get it from their servers without even having to upload it, like you do with Google Music. Right now Google’s service is the best option for pure backup since it is free.