What has been whispered about for quite some time finally bubbled to the service today in comments made by both AT&T CEO Randall Stephenson and Google in response to Android updates and how they arrive on Android devices.

The story goes like this. Stephenson made some remarks at the Milken Institute’s Global Conference inferring that it was Google and not AT&T that “determines what platform gets the newest releases and when.”

He also went on to say that when it comes to Android updates, it’s often “a negotiated arrangement and that’s something we work at hard. We know that’s important to our customers. That’s kind of an ambiguous answer because I can’t give you a direct answer in this setting.”

You can watch Stephenson make said remarks during his talk in the video below.

The statements were odd, because as 9to5Google points out, we had thought we had the process narrowed down. Google releases the open source. Manufacturers get to work getting the update ready for their specific devices. Carriers get the updates, make sure everything is in order, get them certified, and the software is then pushed to users.

Motorola has explained this process before, specifically in regards to the latest Android update, Android 4.0 Ice Cream Sandwich.

So, it was a little odd to hear Stephenson make those remarks and it seems Google felt the same way as it responded to the CEO with a statement.

“Mr. Stephenson’s carefully worded quote caught our attention and frankly we don’t understand what he is referring to. Google does not have any agreements in place that require a negotiation before a handset launches.  Google has always made the latest release of Android available as open source at source.android.com as soon as the first device based on it has launched. This way, we know the software runs error-free on hardware that has been accepted and approved by manufacturers, operators and regulatory agencies such as the FCC. We then release it to the world.”

Clearly, Stephenson is confused and I expect AT&T to issue some sort of statement that tries to sooth things over. However,  that’s not what has me irked here.

Instead, it’s the mess.

The mess that is Android which has culminated in Google calling out both AT&T and Verizon in the past few weeks. Just a few short weeks ago, a well-known Android engineer called out Verizon, not by name, for being slow to getting the Galaxy Nexus updated with new versions of Android.

And now, Google has called out AT&T for being ridiculous. Great, only, I wish that these companies were working together to fix the problem rather than taking shots at each other. 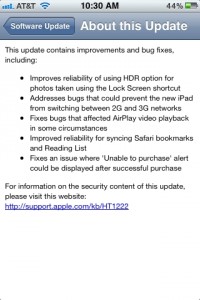 I'd like a lot more of this on my Android phone.

There is obviously quite a bit of tension between Google and the carriers that use Android and a lot of that can likely be attributed to frustrated customers, like myself who are tired of waiting for updates.

I’m not talking about major Android updates either. I’m talking about bug fix updates that improve my device and make it more secure. More stable.

I mean, my iPhone 3GS, a phone that is nearly three years old, got a bug fix update yesterday. My Galaxy Nexus, an Android phone that I bought in December, has yet to receive a single update from Verizon.

That makes about as much sense as Randall Stephenson.

Anyone else feeling the same way?