Ixonos is looking to bring windows–not Microsoft Windows–to the Android user interface, with the aim of bringing better multi- and parallel-tasking support inside the mobile operating system. 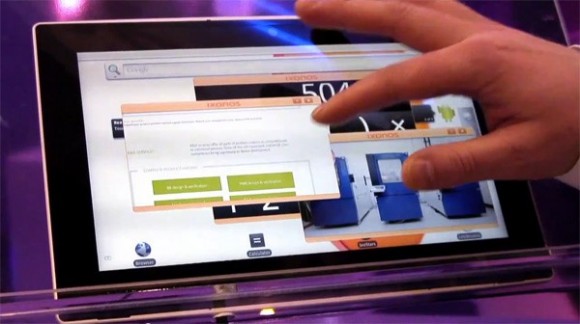 The innovation brought by Ixonos would allow users to manipulate a second app inside a windows on top of the main Android app window, so for instance a user can open a large window of a browser with an embedded video playing, while manipulating a smaller window on the side to run a secondary task, such as composing a quick email inside a messaging app or responding to an instant message inside a messenger app. This would allow apps to run simultaneously in the background, without suspending, pausing, or stopping background apps.

While the move definitely would help Android tablets approach functionality comparable to desktop operating systems, such as Microsoft’s Windows or Apple’s Mac OS X, the move may make the simple mobile OS more complicated in the user experience department.

At this point, it’s unclear what impact, if any, on battery life running simultaneous, multiple apps in the background would be. Most current Android slates, the popular Samsung Galaxy Tab included, have battery life that is less than the iPad–the Tab’s battery life is around 6 hours while the non-3G Nook Android dedicated e-reader tablet has a running life of 8 hours on a single charge.

The Ixonos windows environment on Android was demonstrated at Mobile World Congress on a 7-inch prototype slate running on Android 2.2 Froyo, which supports Adobe Flash 10.1 Mobile.