There is a January Call of Duty: WWII update coming this today with important updates and it paves the way for The Resistance, the first Call of Duty: WWII DLC map pack. Over three months after the release of the new Call of Duty, and well ahead of Call of Duty: Black Ops 4, there are still many key changes coming to the game that will impact the way you play.

We’ve been through so many weapons changes it’s a challenge to stay on top of them, and another one dropped today ahead of a major update. We’ve also learned that we will not see major changes to ADS out of a Sprint, but we are seeing some changes to ADS on specific weapons and there is work being done on the Spectator bug.

This is what you need to know about the January Call of Duty: WWII update that is coming later today, before the first DLC arrives on PS4 later this month. 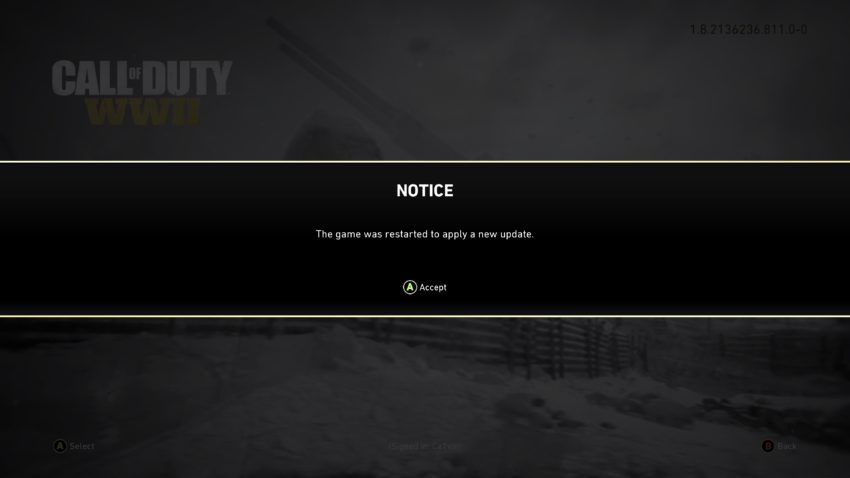 When to expect the January Call of Duty: WWII update.

The January Call of Duty: WWII update release date is set for today. Studio head Micheal Condrey announced the update on Reddit saying, “There’s a game update coming with some key fixes too. Plus a host of additional news that we look forward to sharing in the days ahead.” This week Condrey confirmed the update is coming on January 23rd.

The Call of Duty: WWII DLC 1 maps and zombies arrive on January 30th, and it makes sense for any game update to arrive before the new content, not a day after. It’s not clear if the maps will come as part of the update, which could push the size, but that’s been done with the first DLC on other Call of Duty games.

Sledgehammer Games did not confirm a specific January Call of Duty: WWII update release time, but thankfully they are predictable for Xbox One and PS4. We know that the team is working on updates for both consoles and PC, but there may be a small delay between the release times and sometimes the PC release date is a little later.

Condrey referred to the update coming in the morning, which lines up with previous releases. For the most part, you can expect to see the January Call of Duty: WWII update land around 1PM Eastern, 10 AM Pacific. This is when most updates arrive including smaller weapons tuning updates.

Thanks to multiple updates through social channels we know some of the changes and what’s new in the January Call of Duty: WWII update. This is an important update that will include key changes and it comes right after a weapons tuning update.

Today, January 18th, Sledgehammer Games pushed out a weapons tuning update that includes the following changes. You don’t need to wait for the full update to see these changes in action. This also includes small maps updates.

In the full update we will see the following fixes as confirmed by Condrey in a Reddit post this week. Here’s the full list of what’s new in the update.

We could also see a new Domination XL playlist in the very near future that boosts the points per kill from 50 to 100 and other changes. Sledgehammer Games is testing a new health regen time that would speed up health gain after a shootout, but it’s unclear if it is going to be ready for this update.

What’s Not In the January Call of Duty: WWII Update

We know that you will not see any changes to the ADS Time out of Sprint in the January Call of Duty: WWII update, or any near term update for that matter. Condrey shares a long explanation, but basically says it’s not happening. Here’s the full response on why you won’t see even a slightly faster ADS out fo Sprint in Call of Duty: WWII.

“In past Call of Duty games the Dexterity perk made the ADS time out of sprint faster, in some cases +50% faster than without dexterity. This made it a crutch perk and by far the most used perk in those games. We initially had a Basic Training that offered this functionality, but found that it was once again being chosen much more often than the other options presented. When there’s a “crutch” perk like this, it results in a non-choice for players since they feel they need to take that perk or Basic Training just to be competitive. This problem was exacerbated with our Divisions CAC system which promotes a more focused playstyle through a sole, meaningful Basic Training choice rather than a multi-choice Pick system.

Additionally, a main design pillar we had in this game was “boots on the ground in a WW2 era.” That meant more than just not having boost jump and an arsenal of speed buffs; it also meant a return to an overall more strategic and slower pace of conflict. The removal of boost / thrust also gave us predictable places from which threats could appear, and a more consistent closing speed between players. The question for us became, “Do we want a crutch perk that also makes the game play faster?” Our answer was no.

Given that, we decided to make the ADS time out of sprint the same as the normal ADS time and not offer a means to make it faster. We do have the Quickdraw attachment, which makes ADS speed faster across the board and, as you can imagine, it’s super popular. A dexterity perk + quickdraw attachment “crutch combo’ just didn’t work for our design ambitions and game feel for WWII.

We have discussed a buff to ADS sprint out times for Airborne, but we already have an SMG heavy meta and we’re not convinced that’s the best option for the game. I don’t think a Dexterity Basic Training is either. Perhaps a new movement focused Division, with other trade-offs built in, would be a future option (but don’t hold us to that).

I’m sure for some people this will go down like a lead ballon(sic). Given everything we see across all players, regions, game modes, skill levels, etc, we’re definitely listening here but not acting on any sprint out changes in the short term. Hope this update helps provide context, if nothing more.”

While not specifically a part of the update, we traditionally see a major update pave the way for the new Call of Duty DLC content and we expect this is the case in January.

The Resistance Call of Duty: WWII DLC map pack 1 includes three new multiplayer maps, a new war mode map and a new zombies experience. One of the three new maps is a re-imagining, so keep that in mind.

Players can buy The Resistance as a standalone DLC for $14.99 or buy the Call of Duty: WWII Season Pass for $49.99 and get four map packs.