Jetpack Joyride for Android is finally here, well on the Amazon App Store at least.

The addictive side scrolling game remained an iPhone and iPad exclusive app for nearly a year after launch, but Jetpack Joyride is now available for Android phones and tablets, like the Nexus 7.

Take control of Barry Steakfries as he battles his way through a lab of mad scientists bent on un-named evil plans. Tap and hold on the screen to boost the jetpack. Avoid electrified fences and laser beams that get progressively harder as Barry moves further into the lab. 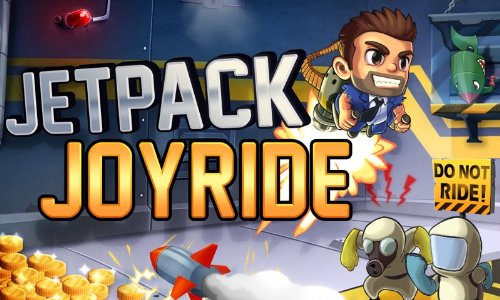 The game is about more than going as far as possible in a single turn. Players can take on challenges to collect specific items or fulfill specific activities like failing at a specific interval or collecting no coins.

Jetpack Joyride is free, but users can make in app purchases to get coins faster. My first in-app purchase for the iPhone version was the Counterfeit Machine, which doubles all coins collected in-game.  Coin bundles go up to 1,000,000 coins for $13.99. It’s easy enough to earn coins through the standard play, so there’s no need for most players to purchase coins. 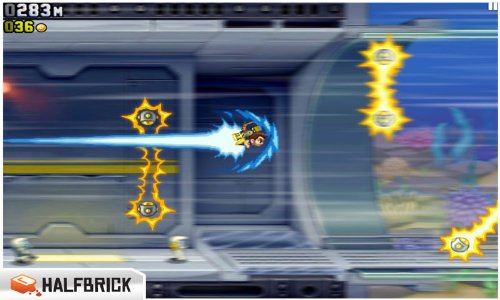 Blast forward with power ups in Jetpack Joyride for Android.

In the Google Play Store, users will find Jetpack 2012, a $1 game that judging from the reviews, some users thought was Jetpack Joyride.

Install the Amazon App Store on an Android phone or tablet and choose Jetpack Joyride to get starter. Hopefully it will arrive in the Google Play store after a short exclusivity.