The Kindle Fire lit up the media yesterday in an announcement of Apple proportions. Immediately people began asking if this was the iPad killer that had been talked about since Apple’s tablet took over the market, there was also talk of cutting into Android tablet sales, but these miss the point.

The iPhone 5 may be the gadget that gets burned by the Kindle Fire this holiday season.

In order to grow from the 28% hold on the market, Apple needs to get more iPhone users. This can be done by poaching from Android, which is a possibility, or by getting new smartphone buyers to pick the iPhone 5 as their first smartphone. The Kindle Fire could steal iPhone 5 sales from this market because it delivers just enough of what these consumers need at an amazing price.

Kindle Fire Hands On – Showing off features that could convince consumers to purchase the Fire over the iPhone 5.

How big is this potential market of non smartphone owners? While it seems that everyone has a smartphone these days, smartphone owners represent only 43% of total cell phone usage. This may hit 50% by the end of the year, but that still leaves a huge segment of the market open to a new gadget — one that could be an iPhone 5 or a Kindle Fire.

How the Kindle Fire Could Burn the iPhone 5

No Data Plan – One of the biggest things keeping first time smartphone buyers from taking the plunge is the data plan. By keeping the Kindle Fire WiFi only, the Kindle Fire is priced more attractive up front, and the total cost is $199, not over $2,000 like the iPhone.

By removing the need for a data plan, and hitting the rest of these points, the Kindle Fire is an attractive device for the average consumer who has toyed with the idea of getting a smartphone, but doesn’t want to spend money every month on a data plan.

The Ecosystem – The iPhone and iPad enjoy great success because the device gets out of the way and allows you to use the device, but you also have access to movies, music, books, magazines, apps and more. Easy access to content has been one of the biggest problems for Android based tablets and smartphones, but now Amazon has delivered all of this — exclusively to a $200 device. 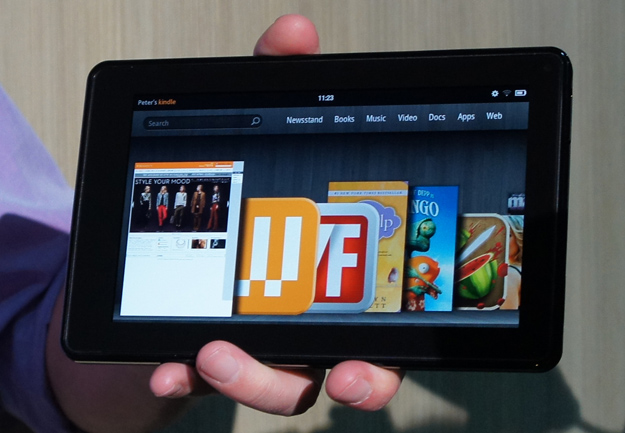 Price – On stage Jeff Bezo’s Amazon’s CEO kept hammering home that Amazon was delivering, “Premium products at non-premium prices.” Unlike many times when companies say this, it looks like Amazon may have actually delivered on this promise. The initial reaction of practically every regular consumer I have talked to is, at $200 this is a no brainer. These are buyers who have avoided spending “$600 to $800” (the prices most often quoted to me) on the iPad.

Kindle Fire Does Most Smartphone Activities – This isn’t going to replace the voice part of smartphones, but if you look at the most popular activities on smartphones, per the Pew Internet and American Life Project research, you’ll see that the Kindle Fire can do almost all of these things. At 7 inches, the device is portable enough to be a constant companion, much like a smartphone. Missing from the list is listening to music, which is not shown below.

How Most Consumers Use Smartphones

Consumers can download the TextPlus app from the Amazon App store to handle text messaging on the Fire, or use other similar apps.

Will the Kindle Fire “kill” the iPhone 5? Definitely not, but at the current price it arguably poses a bigger threat to iPhone 5 purchases by new smartphone buyers, which Apple wants to bring on board.

Apple is holding an iPhone 5 event on October 4th at the Apple Campus. This iPhone event is where we expect Tim Cook to announce the iPhone 5 details and iOS 5 release date. This is Cook’s first time pitching an iPhone on his own, after Steve Jobs resigned. We may also see an iPhone 4S and a new Assistant feature that lets you control your iPhone with your voice, which could be exclusive to the iPhone 5.

Update for clarification: In this scenario I still see consumers keeping their flip phone for calls, much the way I keep a smartphone and a tablet. Two devices, but a different featureset for for each.