Amazon’s Kindle Fire hasn’t even been launched yet and the online retailer’s debut first-generation touchscreen tablet has already generated over 200,000 pre-orders by some estimates. The device attracted the attention of the world due to its modern specs, clean design, and low $200 price point. The 7-inch dual-core tablet garnered over 95,000 pre-orders when it was announced a week ago. 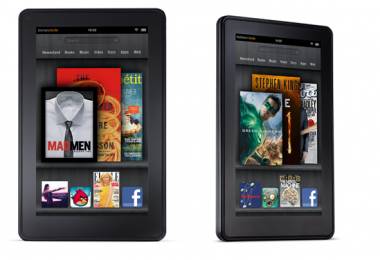 While attention has been on Apple’s iPhone 4S recently, Amazon’s tablet may be the ace up Google’s sleeves. The Android-powered tablet runs a customized version of the Android operating system to highlight Amazon’s digital content, from books to music and videos, apps and magazines, and more. Amazon’s built-in digital content ecosystem will be the first from the Android camp that is broad and powerful enough to tackle Apple’s iTunes dominance where the iOS retailer is selling e-books, digital music, videos, TV shows, movies, podcasts, magazines, and apps.

According to All Things D‘s sources, Amazon have sold an additional 25,000 units of the Kindle Fire tablet every day since the 95,000 units on the date of the device’s announcement. Some estimates peg pre-sale numbers as high as 245,000 units to date, and the Kindle Fire has still not shipped yet! Still, Apple’s iPad has sold more on launch weekend with a 1 million tablets sold, but 250,000 is not a bad number–it’s the same number as RIM has moved in an entire quarter for its PlayBook tablet, which boasts similar dual-core specs, 7-inch display, and a very similar minimalist design.