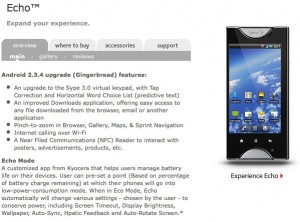 It looks like in addition to bringing the dual-screen Kyocera Echo up to date from Android 2.2 to Android 2.3.4 Gingerbread, Sprint and Kyocera may have other secret goodies to enable on the handset, including WiFi calling and NFC features.

There are other more subtle, but useful, features as well that come with the update, including predictive text, a Swype 3.0 virtual keyboard, and an improved Downloads application that will allow users quick access to any file downloaded from an email, browser, or any other app.

Moreover, the update will bring a more ubiquitous pinch-to-zoom experience. Now, users can pinch to zoom within the browser, the Gallery app, Google Maps, and also Sprint Navigation.

According to the update memo, Kyocera says that ‘a Near Field Communications (NFC) Reader to interact with posters, advertisements, products, etc.’ will also be part of the update. If that’s true, it means that the Echo was released with hidden NFC hardware that the Gingerbread update would unlock. It also means that the Echo will be the second NFC-equipped handset in Sprint’s smartphone lineup, following the Google-branded Samsung Nexus S 4G.