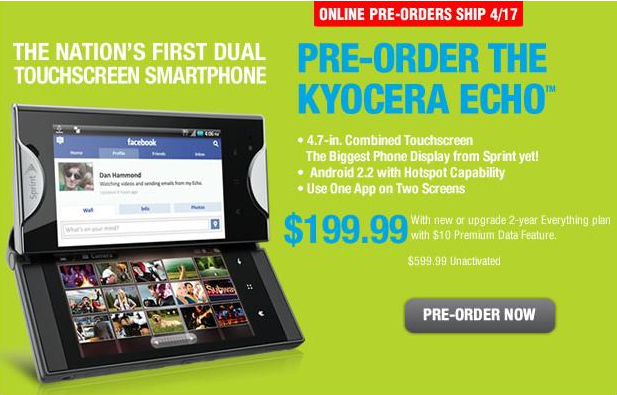 Last week, Sprint began offering pre-orders on the device with dual 3.5 inch displays and now, those trying to get a hold of it, have two different options in regards to how to get it. Radio Shack, like Sprint, is offering up the Echo for $200 on a new two year contract and pre-orders will ship starting April 17th.

For those that don’t want it on contract, it will cost a hefty $599.99, which is probably enough to scare most people into signing the dotted line.

The Kyocera Echo was introduced back at the end of February and will be arriving with Android 2.2 out of the box, a 1 GHz Snapdragon processor, a removable 1370mAh battery (it comes with 2), as well as the ability to transform the device into a mini-tablet with the 3.5 inch screens possessing the ability to combine together.