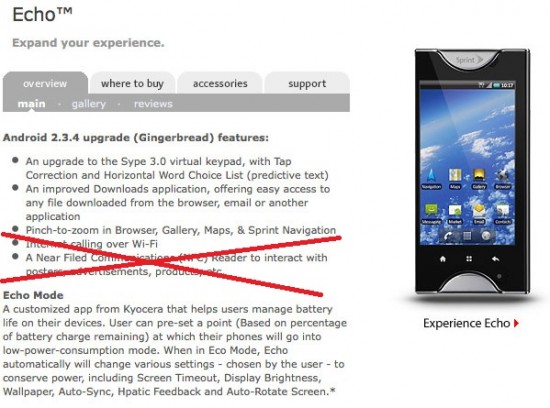 It looks like a Kyocera employee had hastily posted the listing for the Android Gingerbread update for the dual-screen Echo Android smartphone for Sprint. When the listing went live, it had listed that the device would get WiFi calling as well as enable the Near Field Communications (NFC) capabilities on the handset, which is inaccurate. A Kyocera representative had corrected the listing with Brief Mobile and stated that those features are not part of the update package. Interestingly, though, the representative stated that Kyocera is testing those features in experimental mode, which could suggest that the Echo does in fact have the NFC hardware built into the phone.

A new feature that is enabled by the update that wasn’t mentioned before, however, is the new Eco Mode:

A customized app from Kyocera that helps users manage battery life on their devices. User can pre-set a point (Based on percentage of battery charge remaining) at which their phones will go into low-power-consumption mode. When in Eco Mode, Echo automatically will change various settings – chosen by the user – to conserve power, including Screen Timeout, Display Brightness, Wallpaper, Auto-Sync, Hpatic Feedback and Auto-Rotate Screen.*