Kyocera is hoping that its new Android smartphone, the Kyocera Rise, will appeal to those interested in an Android 4.0 Ice Cream Sandwich smartphone with a physical QWERTY keyboard.

We were able to go hands-on with the Kyocera Rise, the latest Android smartphone from Kyocera, at CTIA 2012 in New Orleans. The device won’t blow hardware enthusiasts away but it will appeal to those that want a solid physical keyboard and a fairly plain version of Android 4.0 Ice Cream Sandwich.

It also features a slide-out QWERTY keyboard that we didn’t find to be as good as the one found on the Motorola Droid 4, but again, this is not a phone that is intended to appeal to those that want a high-end device. 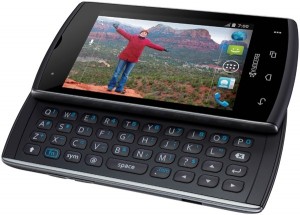 The keyboard features four rows, complete with navigation keys tucked into the right-hand corner. It felt sturdy and it did not feel cheap which sometimes can happen on slide-out QWERTY devices.

The Kyocera Rise also features 512MB of RAM, 2GB of on-board storage plus a 2GB microSD card, and it also has Bluetooth support.

Its design won’t win any awards but it’ll get the job done. It will especially appeal to those that want physical buttons on the bezel of the device. Android 4.0 offers virtual navigation buttons but there will be some people that still want the physical keys.

Kyocera did not confirm any U.S. carriers but did say that it would be out this summer.

If the pricing is right, and the carriers don’t foul up the near vanilla Android 4.0 experience, Kyocera might just find a niche.