It’s now August 31st and that means that the Kyocera Rise, which is already available on Sprint, is now available on pre-paid carrier Virgin Mobile.

The device, which is a budget Android 4.0 Ice Cream Sandwich smartphone, is available for a mere $99 without having to sign up for a new contract. That’s a fantastic deal for a phone that is aimed at those looking to pick up their first smartphone.

Kyocera’s Rise also should appeal to parents looking to get their teenager a smartphone for cheap and off-contract. 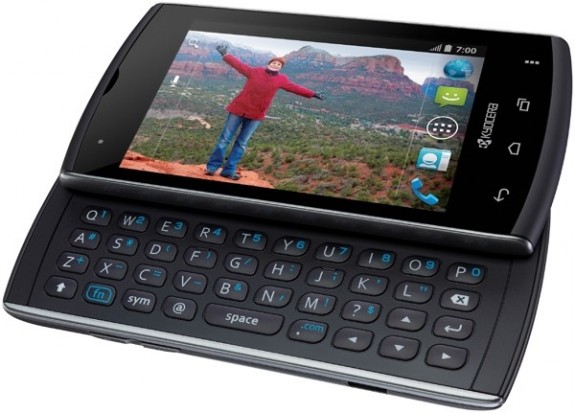 The Kyocera Rise has launched on Virgin Mobile.

In addition to Android 4.0 Ice Cream Sandwich, the Kyocera Rise features a 3.5” HVGA LCD Touchscreen, a 1GHz Snapdragon processor from Qualcomm, and a 3.2MP camera that shoots video and comes with an LED flash.

It also features a slide out QWERTY keyboard for easy typing, a microSD card slot that supports up to 32GB of expanded storage space, Swype keyboard pre-installed, stereo Bluetooth, and something called Eco Mode which allows for better battery life management.

The device is currently available online through Virgin Mobile, at select stores and in stores branded with the Virgin Mobile logo. It will be coming to additional locations sometime in September.

It’s not a 4G WiMax phone however. Those who purchase it will be stuck using 3G data speeds. The Sprint model is in the same boat and doesn’t offer 4G LTE data.

Virgin Mobile allows prospective owners to pair the device with its unlimited data and messaging Beyond Talk plans which start at just  $35 per month.

Again, this isn’t a top of the line phone but it’s worth a look especially at its price and especially because it’s running Android 4.0 Ice Cream Sandwich.