The Kyocera Torque is a rare breed as it’s both a ruggedized Android smartphone and one that packs 4G LTE network connectivity on Sprint’s U.S. network. Though Sprint has announced the Torque will be coming to its network this Spring, pricing and specific availability is still not known about the device at this time. The device is  Mil-Spec 810G rated.

The Torque features a 4-inch WVGA resolution touchscreen display, impact-resistant glass, dual-core Snapdragon processor, Android 4.0 Ice Cream Sandwich, 4G ROM, 1 GB RAM, NFC, Bluetooth 4.0, and a micro SD card slot that can accommodate cards up to 32 GB capacities. Given the lower resolution WVGA display by today’s standards, the Torque should be more affordably priced for those who demand a smartphone to fit their more rugged work environments or lifestyle. Additionally, for companies looking to deploy a fleet of Torques, Sprint is saying the Torque will also be able to access Sprint’s Direct Connect push-to-talk network. 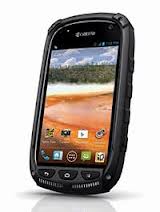 Aside from the ruggedized construction of the phone, the Torque also boasts Smart Sonic Receiver Technology, which uses ceramics and sonic waves to transmit sounds, eliminating the need for traditional speakers. This allows the Torque to be used in loud environments–like at a concert or construction site. This technology was shown last Spring in a concept phone.

Torque is the first U.S. device to feature Kyocera’s proprietary Smart Sonic Receiver technology, which eliminates the need for a traditional speaker in a handset, instead using vibrations to transmit sounds directly to the eardrum with unparalleled sound quality. Building on Kyocera’s 53-year heritage in advanced ceramics, the new technology uses a Kyocera ceramic actuator to turn sounds into vibrations. It uses twin paths to transmit those sounds to the user: traditional sound waves and vibrations that are carried by body tissue directly to the eardrum and inner ear.

And here are some of the ways that the Torque can handle rugged environments: