So, after purchasing a Samsung Galaxy Tab 10.1 and an HP Touchad yesterday I took a few unboxing pictures. My powers of observation obviously went the way of the dodo bird. It wasn’t until this morning when I looked at the pictures that I noticed how the Galaxy Tab 10.1 was packaged with an emphasis on the landscape orientation and the TouchPad with portrait as the emphasis.

Either Tablet (like all of them) work well in either orientation and rotation works reasonably well for both, although the TouchPad is a bit more sluggish in my early testing. So, you can certainly work how you prefer. But I do note that the Android Marketplace does not rotate on the Galaxy Tab, which I think helps define that as a preference in some way or the other. At the least it does in some semiotic fashion.

Call it a personal preference, but I think that both Samsung and HP would be well served to have a hardware button for rotation lock. Apple did early on with the iPad, then removed it, then brought it back as an option. I know for some this isn’t a big deal, but I personally prefer having a switch to make this happen. 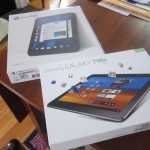 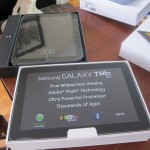 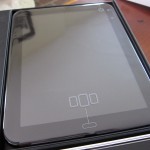 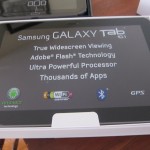