With the announcement of the Galaxy S III looming around the corner, leaks and speculations about the third-generation flagship Android smartphone from Samsung are flying out quick. The latest leak provides us with not only a picture of the device and a photo of the device in question.

According to a Reddit post, a person who claims to have a friend working for Samsung says that Samsung is still undecided about releasing a pure Android device without any of the typical UI overlays and one that’s saddled with the TouchWiz user interface. One potential option, according to that person, is that Samsung may have a dual-launcher option allowing users to select and change between a native and vanilla Android 4.0 Ice Cream Sandwich–like on the Galaxy Nexus–and an experience with TouchWiz, such as that found on the Galaxy S II or the Galaxy Note. 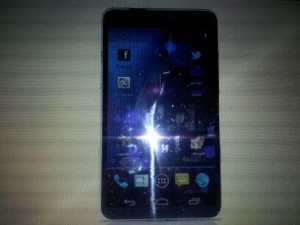 He said that it will possibly have two optional launchers, ICS with touchwiz overlay and vanilla ICS. They aren’t 100 percent sure if they will stick with touchwiz or have the dual launcher option. If they go dual, you will have the option of picking which one to use at startup, and you can change any time. He said it has a 4.7 inch screen that nearly takes up the whole phone, but some bezel space was needed for the camera, speakers, mic, and so cases would fit on it. He said it WILL be HD and have a ceramic “micro arc oxidation” back.

That user also said that the device has a 4.7-inch display–slightly larger than the 4.65-inch display of the Galaxy Nexus–that’s a near edge-to-edge display, however, Samsung had to accommodate space for the microphone, earpiece spacer, and front-facing camera. As a result of some bezel space that’s been added, the device will be able to be outfitted with cases.

It also appears that like the Galaxy Nexus, the Galaxy S III, according to this leaked image, will lack any physical or capacitive hardware buttons–those buttons have appeared to be moved onto the display.

The leaked specs this time around points to a Super AMOLED Plus HD display, a quad-core Exynos processor, 2 GB RAM, a capacious battery, and a 12-megapixel rear-facing camera.

Additionally, like HTC’s recent One S smartphone, it seems that the Galaxy S III may utilize a similar micro arc oxidation process to give the device a ceramic-like back cover. If true, this may mark the end of chintzy plastics used on the rear back battery cover of Samsung phones.

The device was last said to be finalized in its design and is headed towards production. Samsung promised an announcement to unveil the flagship in the first half of this year.