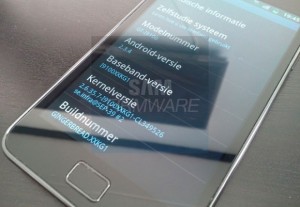 While the U.S. is still awaiting the release of the Samsung Galaxy S II, international owners of Samsung’s second-generation dual-core flagship Android smartphone can grab a leaked Android 2.3.4 Gingerbread firmware update for their devices if their aching to take Google Talk video chat with them on the road.

The firmware, which shows a July 5th build date, also improves on cellular reception with a new modem firmware. Users who have installed the firmware have also noticed improved battery life as well.

If you’re going to try to install the firmware on your Galaxy S II, you should know that as the firmware was leaked, it won’t officially be supported by Samsung or your carrier, and installing the firmware may void your warranty, cause problems for your device, or have unintended effects.