Newly leaked images of the HTC 606w have begun to appear online, suggesting that HTC may expand its HTC One smartphone lineup with a mid-range smartphone. When HTC launched the flagship HTC One Android smartphone, the company said it would only launch “one” phone a year, perhaps alluding more to launching one flagship Android phone. If this is the case, the strategy would open up HTC to launching a mid-range device in the form of the HTC 606w in 2013. 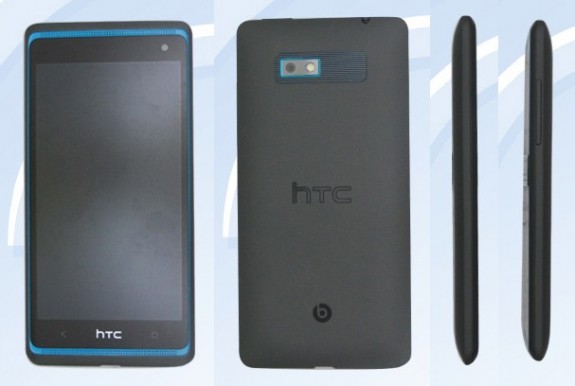 The device bears some similar design language from the HTC One, including what appears to be stereo front-facing loud speakers, dubbed the HTC BoomSound speakers powered by Beats Audio. The design is also a continuation of what HTC had done for the HTC 7 Pro, a Windows Phone 7 device that launched in the U.S. as the Sprint HTC Arrive. Though the Arrive didn’t have dual front-facing speakers, the device does have similar mesh speaker grill arrangements similar to the HTC One and the HTC 606w.

Pictures of the HTC 606w were initially posted on Engadget.

And while the HTC One boasts a high resolution 1080p full HD Super LCD 3.0 display, the HTC 606w does with a qHD resolution display with 960 X 540 pixels on a 4.5-inch screen. The device itself is said to be powered by a dual-core 1.2 GHz processor. And HTC swaps out the new 4 Ultrapixel camera for an 8-megapixel shooter on the mid-range number.

Additionally, the device will have 1 GB of RAM and will come with a microSD slot, the latter is a feature that is missing on the flagship.

The device appears to be thin and though HTC doesn’t use its zero-gap construction in creating a unibody aluminum enclosure, the HTC 606w may be comfortable to hold with its soft grip finish.