It looks like Nokia won’t be the only ones to make waves in the induction, or wireless charging, charging market as Google’s forthcoming Nexus 4 by LG smartphone will also carry this feature. In the past, we’ve seen a leaked accessory that looks like the wireless Palm Touchstone charger for the webOS-powered Pre smartphone and now a leaked user guide that’s been prematurely posted by LG Australia confirms the feature for the Nexus 4 smartphone–the guide had subsequently been pulled. 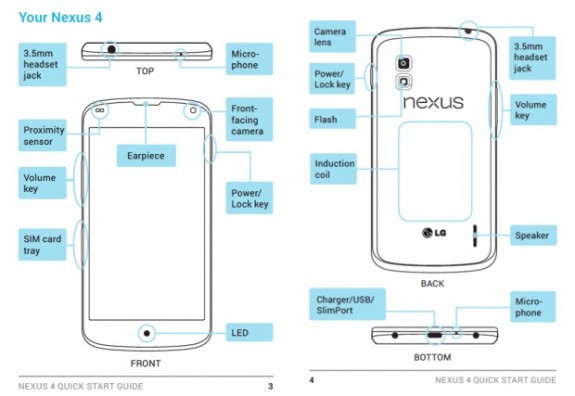 According to the image of the Nexus 4 detailing various hardware features, we know that there is an induction coil on the rear of the phone, presumably for use with a wireless charging accessory that we’ve seen in the past.

The leaked user guide has been re-posted on Engadget.

And like the Nexus 4, Nokia’s recent announcement of its Windows Phone 8-powered Lumia will also see support for wireless charging. Nokia is also partnering with a few companies and airports to bring wireless charging and make it more accessible to Lumia users in the hopes that the feature become more widespread. It’s unclear if Google will take the same route with the Nexus 4’s wireless charging capabilities–with Google’s backing and perhaps additional partners added, we can hope to see wireless charging begin to enter the mainstream. Verizon had also supported the feature as optional accessories in the past with various Android smartphones.

The leaked guide confirms other tidbits about the smartphone that we’ve already seen before, including the fact that the device will be available in either 8 GB or 16 GB of storage.

The LG Nexus 4 was originally scheduled to be announced today, but given the recent hurricane on the East Coast, Google had cancelled its New York City media event. The event was speculated to debut the LG Nexus 4, Android 4.2, and a Nexus 10 tablet made by Samsung. Additionally, a refresh of the Nexus 7 with additional storage and a separate 3G model was also rumored.